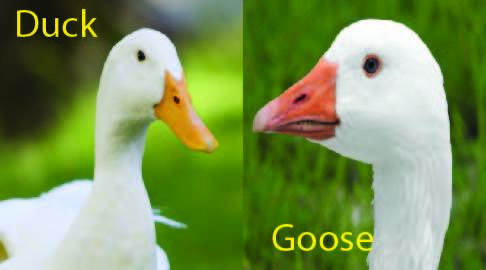 A duck and a goose look pretty much similar to the extent that it would be difficult for you to differentiate when put together. I will take it as you are probably confronted with this same issue that is why you have found yourself on this page. Well fear not, as in this article I will distinguish between duck and goose that will be very useful for you to make the differentiations.

Overview of duck and goose

Ducks can withstand both cold and heat. Their down feathers shield them and keep them extremely warm during the winter months. Ducks, unlike chickens, have a thick underbelly that keeps them warm as well. Keep in mind that they still need a draft-free duck refuge to escape to if the weather isn’t cooperating, though they’ll usually stay outside even in the worst weather.

Geese were nearly extinct a few years ago due to overhunting. The geese have returned today. Some individuals dislike them because there are so many in some regions. Geese will pursue and nip folks, as well as wreak havoc on park and golf course turf.

Even if you dislike geese because they are chaotic and loud, you have to acknowledge that their young are adorable. Nests are built by mother geese near lakes and rivers. The nests are composed of grass, twigs, mud, and feathers and are flat and wide. The babies are gorgeous, fluffy, yellow, and fluffy! A day or two after birth, baby geese can move and splash some water in a pool or river.

Now let’s look at the differences between duck and goose