All the names of Biomutant Tribes and How to Switch Ally 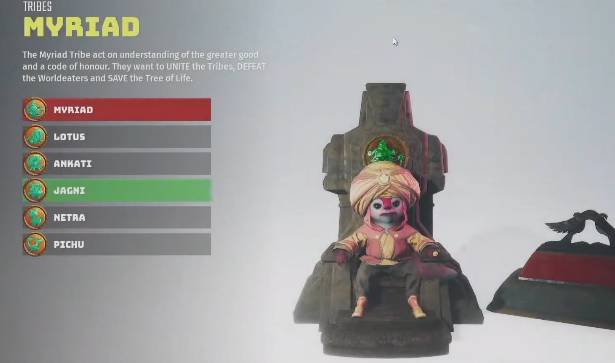 In Biomutant there are three main story arts, your character’s backstory, the tree of life and the ongoing tribal war. But what do we actually know about these tribes? Surprisingly, it’s a lot more than you may think and today we are going over everything we know about the tribes in Biomutant.

Depending on which tribe you choose to align yourself with it will decide which ending you get to the Tree of Life Story art. You can also switch allegiances and ally with a different tribe simply by going to a tribe fort and talking with their sifu. Now, we don’t know if this is something that can be done at any time or if there’s a point of no return when fighting for one tribe against another. For example, the first two tribes you meet are the Jagni and the Myriad, these are rival tribes as the Jagni are dark aura oriented and the Myriad are light aura oriented.

If you decide to ally with the Jagni tribe the only options available when defeating the other tribes become subdue or vanquish. So, if we subdue the Myriad tribes are we still able to switch sides betray the Jagni and help the Myriad rise to power? and if we can. Is there a hard stop as to when we can no longer do this?

The names of all six tribes are the Myriad, Lotus, Ankati, Jagni, Netra and Pichu. while we know the names of each tribe, we’ve only confirmed information about the Jagni and the Myriad as these are the two tribes you meet in the first hours of the game. Each tribe also has a specific tribal weapon and specific tribal armor.

In order to unlock these weapons, you must first decide to ally yourself with the tribe and then proceed to take over outpost from rival tribes, after you take over the first outpost you are rewarded with your tribes’ weapon and after completely defeating a rival tribe you acquire that tribe’s weapon.

Taking over a second outpost rewards you with your tribe’s gear or armor, again, we’re not sure how this works if you decide to betray your current tribe and work in the other direction. We’ve also been able to confirm that tribal gear, aka armor is only unlocked by supporting a tribe, you cannot unlock a rival tribes’ armor by defeating them.

What are the name of the Tribes in Biomutant?

The names of the Tribes in Biomutant are Myriad, Lotus, Ankati, Jagni, Netra and Pichu

How many Tribes are in Biomutant?

The number of Tribes in Biomutant at moment are Six (6) tribes.