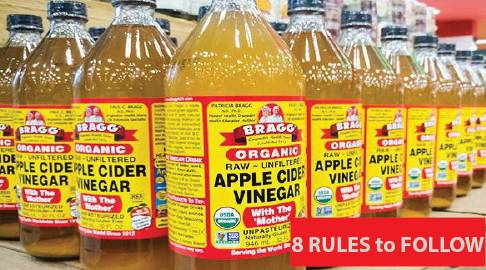 Let’s talk about apple cider vinegar, something I’m sure you drink every day. Just kidding. But seriously, it can do great things for your body, from helping you lose weight to keeping your heart healthy, however you shouldn’t drink it under certain circumstances, there are rules to follow. Why can’t I take it straight, is it unhealthy to drink before bed. Should I have it before meal, or after, let’s talk about eight apple cider vinegar rules, you need to follow.

Kicking things off one of the best advice we can give you is to drink apple cider mixed with something else. You didn’t seriously think you need to drink a full glass of it. Did you? And how about your water or your tea. The vinegar might give it a unique sort of taste, you know. the reason you shouldn’t drink it straight is because there are several effects that can have on your body, consuming it in large quantities, while it’s in its pure form will seriously hurt your insides, let’s dive into those details.

Apple cider vinegar is okay to have during the day but if you drink it before going to sleep. You are asking for trouble. Apple cider vinegar really does a number on your throat, it’ll give it a burning sensation that drives you crazy. This isn’t a pleasant way to end the day. Have you ever had throat burn? This is a condition where your throat becomes irritated, causing it to swell up and burn in the case of apple cider vinegar, its acid content is very powerful. If you’re laying down a can hurt your esophagus to the point where it feels like it’s on fire.

Just a caution. If you do have a little apple cider vinegar before bed, make sure you sit upright for at least 30 minutes before hitting the pillow. This will ensure that there’s no acid reflux and your esophagus isn’t irritated, you don’t want to wake up feeling like your throat is being barbecued.

We all hate that friend that walks around in the summertime with a bottle of alcohol taking arrogant sips whenever they feel, I mean, come on, there’s a time and a place for that. Well, taking swigs of apple cider vinegar is also a NO-NO but for health reasons. To put it simply, don’t take sips from the container, not only are you overusing it the acid of the apple cider vinegar can seriously damage your teeth, particularly your tooth enamel tooth enamel is the outer surface layer of your teeth. It’s supposed to protect your teeth from decaying highly acidic foods ruin your enamel, making it easier for those pearly whites to rot. In one study from 2014 Scientists exposed wisdom teeth of vinegar in just four hours, the teeth lose up to 20% of their minerals to prevent apple cider vinegar from doing this drink it with a straw. This way the drink has minimal contact with your teeth. Also, if you feel the need to brush, avoid doing it for about half an hour after drinking.

If Apple Cider Vinegar can irritate your throat, just think about what it can do to your skin, it can cause your skin to react dramatically. This is if you are using it wrong. When applied properly. Apple cider vinegar can get rid of pimples and dandruff, it’s like a teenager’s dream acne product. apple cider vinegar can also ease your sunburn, applying apple cider vinegar to your skin can boost the skin’s pH level and strengthen its protective barriers, helping you withstand those harmful rates, studies have even shown that apple cider vinegar is more effective in skin treatment than certain soaps and cleansers, I’m talking about actual products specifically made to treat your skin. If you suffer from acne, you’re probably wondering where you can get your hands on some of this stuff but keep in mind, it will only work if a minimal amount is used. This again is due to its acid content. If you’re not diluting Apple Cider Vinegar When applying it, it’ll kill skin cells, and even leave chemical burns, depending on how much you applied these markings can be semi-permanent. be cautious and don’t overuse apple cider vinegar, especially not to get rid of permanent markings.

Don’t Drink Too Much

Apple cider vinegar is good for you but in moderation. Keep that word in mind, because of its numerous health benefits, it might be your first instinct to down half a bottle in one sitting. This is wrong. People have different reactions to certain drinks and apple cider vinegar is no exception. If you are new to this drink, it’s advised that you ease into it. Drinking too much too quickly can really upset your stomach. You might also feel an intense burning sensation similar to the one we described with your throat. If you’d like to give apple cider vinegar a try. Start with no more than two tablespoons a day. This will lower your chances of getting a harmful reaction, drink it with some water for starters.

You know, your teacher told you not to sniff glue as a kid. Well, the same goes for Apple Cider Vinegar when used with theme, apple cider vinegar can relieve your sinuses by stopping infections. It can also prevent headaches but breathing it in on its own. That’s dangerous business. Inhaling apple cider vinegar will really beat up your lungs think about it, you are exposing your insides to raw acidic liquid that has the potential to burn. I mean you can’t fool around with this stuff. While you can drink it in small quantities do your best to avoid breathing it in, this begins the moment you open the container.

Keep Apple Cider Vinegar Away from Your Children

much like corrosive, or poisonous chemicals, you need to keep apple cider vinegar away from kids, due to all the negative effects that has on people’s skin throat and lungs. Children are particularly vulnerable to it. In fact, researchers have recommended vinegar itself to be labeled as a potent and caustic substance and be placed in childproof containers. If you have apple cider vinegar out, make sure it’s out of reach of your kids.

Do you use apple cider vinegar on the regular? Would you consider following any of these rules. Let us know in the comments below.