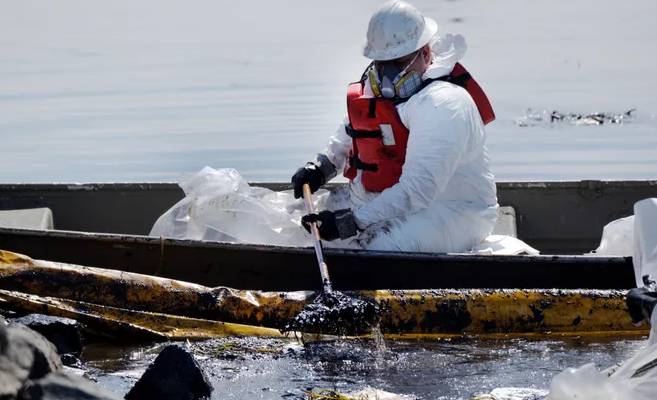 Crews in the water and along the Southern California coastline worked feverishly Sunday to stunt the growing environmental disaster from one of the largest oil spills in recent California history after a possible underwater pipeline leak sent more than 100,000 gallons of oil into the ocean.

Booms, a temporary floating barrier that is used to contain marine spills, were deployed on the ocean surface to try to contain the oil while divers sought to determine where and why the leak occurred. On land, there was a race to find animals harmed by the oil and to keep the spill from harming any more sensitive marshland in Orange County.

Crews were able to remove more than 3,000 gallons of oil from the ocean off the coastline Sunday, according to Orange County Supervisor Katrina Foley.

The oil spill reached the shores of Huntington Beach late Saturday, a popular destination about 30 miles south of downtown Los Angeles after a suspected pipeline burst linked to an oil rig about 5 miles off the coast. The owner of the pipeline, which is one of the largest oil producers in Southern California, shuttered production due to the spill. Officials say more oil will wash ashore this week, covering both beaches and wildlife in thick crude tar.

Late Sunday, Laguna Beach, another popular beach destination, announced all its beaches would close due to the spill’s spread south across the region.Photos and videos from the coastline showed pancake-sized clusters of thick black oil lining the shores. Residents were also pictured rescuing birds covered in black sludge. Foley said Sunday morning dead birds and fish has already been washing ashore.

At least 126,000 gallons of crude spilled into the waters off Orange County starting late Friday or early Saturday when boaters began reporting a sheen in the water, officials said. Huntington Beach Mayor Kim Carr said the amount of gallons of oil that leaked into the water is likely higher, though the energy company that owns the pipeline said totals likely wouldn’t be much higher.

Carr added officials had not been informed how quickly oil was leaking or how much had poured into the ocean since it started Saturday.

“In a year, that has been filled with incredibly challenging issues, this oil spill constitutes one of the most devastating situations that our community has dealt with in decades,” she said, calling the spill an “environmental catastrophe.”

The spill originated from a broken pipeline connected to an offshore oil platform known as Elly. The platform is connected by a walkway to another platform, Ellen, located just over 8.5 miles off Long Beach and operated by Beta Operating Company, according to the federal Bureau of Safety and Environmental Enforcement.

Amplify Energy Corp is one of the largest oil producers in Southern California. Its president and CEO Martyn Willsher said they noticed an issue during an inspection Saturday morning and notified the U.S. Coast Guard. The pipeline was sectioned off at both ends and the pumps were shutdown by Saturday night and remained that way Sunday, he said.

Willsher said the company is still examining how this happened and whether it was indeed a leak. Inspections are done every other year, he said, adding the facilities were built in the 1970s and 1980s and that Amplify Energy Corp has owned and maintained the pipeline for about 9 years.

“We are investigating the source and potential cause of this incident. Like I said we will continue to work with unified command to ensure that this recovery effort is concluded as quickly as possible,” he said. “We’re all deeply impacted and concerned about the impact not just the environment but you know, the fish and wildlife as well.”

Willsher promised the company would “do everything in our power to ensure that this is recovered as quickly as possible.”

He added he does not believe the amount of oil spilled into the ocean likely won’t increase much higher than 126,000 gallons because that was the total capacity of the entire pipeline.

Huntington Beach Police spokeswoman Jennifer Carey said 126,000 gallons of oil had created a spill almost 6 nautical miles long. Carrey warned of “substantial ecological impacts” for the beach and wetlands. About 4 miles of coastline were closed to the public.

“Due to the toxicity of the spill, the city is asking that all individuals remain clear of the beach and avoid coming into contact with oiled areas,” she said in a statement.

Officials warned the public about the dangers of being near the coastline, with toxic fumes that can cause vomiting, dizziness and irritation to the nose, eyes and throat. If one touches the toxic sludge, it could be absorbed by the skin and cause irritation.

Those wishing to help clean up or rescue animals harmed by the disaster were told to not go out to the beaches but instead contact the Surfrider Foundation, a nonprofit dedicated to coastal preservation and cleanups.

The state Department of Fish and Wildlife’s spill response team was aiding the cleanup effort.

The oil spill also forced the cancellation of a popular air show as authorities raced to minimize the ecological damage. Officials canceled the final day of the annual Pacific Air Show that typically draws thousands of spectators to Huntington Beach, a city of 200,000 people.

“The size of the spill demanded prompt and aggressive action,” Carrey said. “Minimizing damage and impacts to our city’s sensitive wetlands and marine environment are of the utmost importance.”

The U.S. Coast Guard was leading the spill response, saying details on the cause of the spill were under investigation. Crews led by the Guard deployed skimmers and floating barriers known as booms to try to stop further incursion into the wetlands and the Bolsa Chica Ecological Reserve.

The Coast Guard said it received a report of an oil sheen Saturday morning. Aircraft were sent up to view the breadth of the spill, and the Oiled Wildlife Care Network was monitoring for tainted wildlife. Officials urged locals not to touch oiled wildlife.

“Trained spill response contractors are working to clean up oil. Public volunteers are not needed and could hinder response efforts,” the Coast Guard said. “We request that members of the public stay away from the area.”

“When we drill, we spill,” Savitz said. “It’s well past time to prevent future oil spills by permanently protecting our coasts.”

The spill comes three decades after a massive oil leak hit the same stretch of Orange County coast. On Feb. 7, 1990, the oil tanker American Trader ran over its anchor off Huntington Beach, spilling nearly 417,000 gallons of crude. Fish and about 3,400 birds were killed.