ESPN should have built around the brilliant Katie Nolan. Her exit is their loss 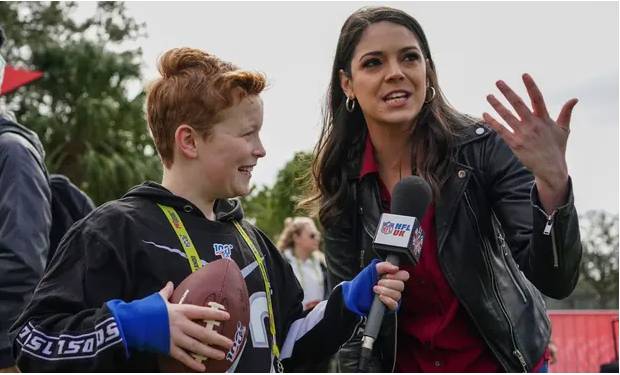 Only Katie Nolan could take an unpleasant topic like the trolling of female sports journalists and turn it into a hilarious skit that makes your lungs ache from laughter. Nolan’s “secret society of women in sports media” also made me, a woman in sports media, want to punch a wall and left me feeling empowered to rebel against systemic misogyny. That’s the Katie Nolan effect. You feel things.

When ESPN hired Nolan in late 2017, it was a no brainer. The uber-talented Nolan had quickly risen from a Boston bartender making YouTube videos in her spare time to being such an undeniable star that Fox created its own show for her, Garbage Time. The show was eventually canceled due to low ratings (aided by a less than ideal time slot) but not before winning a Sports Emmy and earning Nolan cult status her blend of hilarious bits and searing takes on sports’ most uncomfortable issues, such as her takedown of the NFL for allowing Greg Hardy back in the league. Fox knew they had a special talent but instead of finding Nolan a new role they let her sit under contract for seven months before ESPN evidently swooped in.

You would think a behemoth like ESPN would have a concrete plan for Nolan, especially given that her contract was reportedly worth more than $1m a year. Her own show. A weekly special edition of SportsCenter or another known ratings earner. Anything. But instead it offered a vague description of her new role as a “prominent digital presence while also making appearances across ESPN studio programming.”

In hindsight, this ambiguity already marked the beginning of the end of Nolan’s tenure at ESPN, an end that became official on Wednesday. Nolan announced on Twitter that she is no longer with the company.

ESPN has employed no shortage of sports anchors and personalities known for their humor. Kenny Mayne, Michelle Beadle, and Dan Le Batard come to mind. But in Nolan, the network had a comedic tour de force, a driven and talented creative genius with a proven track record of executing unique material.

Nolan is the kind of rare talent you build around, not a quarterback you plunk into an archaic offense. But ESPN neglected to do so. Instead of adding her talents to the heart of their universe, and finally having a shot to perfect that sports-entertainment crossover piece they’ve never quite got right, they experimented with her on the periphery. Without much fanfare, Nolan was tasked with hosting a version of SportsCenter for Snapchat aimed at reeling in a younger audience. She also made guest appearances on Le Batard’s Highly Questionable where she developed incredible chemistry with the host. But there was never a true high-profile role for Nolan at ESPN. She eventually launched her podcast, Sports? and was finally given her own show, Always Late with Katie Nolan, in 2019 where she offered recognizably Nolan sketches like inviting fans who troll college kickers to attempt real field goals and reading the angriest sports stadium one-star Yelp reviews.

But even Nolan’s show was digital at first before making its way to ESPN2, again in a less than ideal timeslot. All told, ESPN never embraced Nolan, and missed an opportunity they may not have again for some time. Despite ESPN’s apparent mismanagement of Nolan, her popularity continued to soar and spurred on a new generation of sports journalists trying their luck in the sports humor space. Yet it’s hard to think of anyone offering the same blend of charisma, authenticity, and ability to make the viewer care about sports on a deeper level than Nolan.

Nolan follows in the footsteps of Jemele Hill, Cari Champion and Beadle as outspoken women who are no longer at ESPN. She will be just fine. Well-funded media companies will be eager to snap her up: The Ringer and Le Batard’s Meadowlark Media are obvious candidates. Wherever Nolan lands, let’s hope that unlike ESPN she is given a platform worthy of her talents.