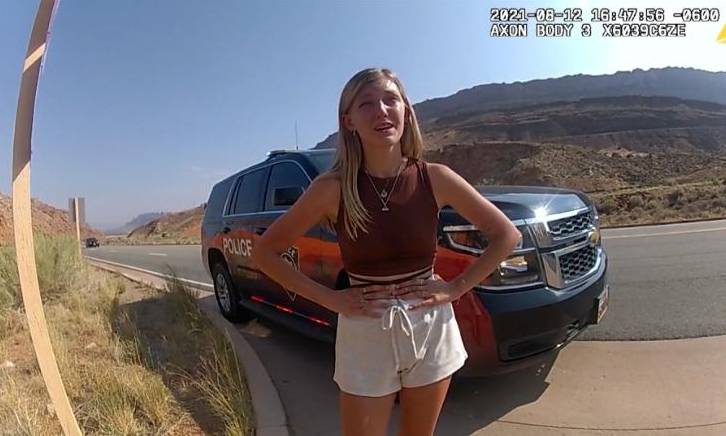 The father of Gabby Petito, who was reported missing over the weekend, made a public plea Thursday for information on the disappearance of the Florida woman.
Petito, 22, was reported missing by her family on Saturday, after they had not heard from her since late August, according to police in North Port, Florida.
“Finding this girl is what matters,” her father, Joe Petito, said Thursday during a news briefing with North Port police, pointing to a photo of the missing woman. “Anything else … comes second to this.”

Petito is believed to have been in Grand Teton National Park in Wyoming before her last contact with family, police said. She was traveling with her fiancé , Brian Laundrie, who has returned to Florida, hired a lawyer and, along with his family, has refused to speak with investigators.

Separately, Petito’s family — via a letter read Thursday by their attorney, Richard Stafford — also appealed to Laundrie and his parents for information on her whereabouts.
“Please, if you or your family have any decency left, please, tell us where Gabby is located,” Petito’s relatives said in the letter.
“Tell us if we are even looking in the right place. All we want is for Gabby to come home. Please help us make that happen.”
Laundrie was traveling with Petito in her white 2012 Ford Transit van with Florida plates, according to a police statement. The van was recovered on Sunday at the North Port home she shared with Laundrie and his parents, the statement said. Laundrie reportedly returned to North Port on September 1.

“We haven’t been able to sleep or eat, and our lives are falling apart,” Petito’s parents and stepparents said in Thursday’s appeal to the Laundries, referring to her as their future daughter-in-law.
“We believe that you know the location of where Brian left Gabby. We beg you to tell us as a parent, how could you let us go through this pain and not help us? As a parent, how could you put Gabby’s younger brothers and sisters through this?”

An attorney for the Laundrie family said in a statement Tuesday that his clients were “remaining in the background … and will have no further comment” on the advice of counsel.
“It is our understanding that a search has been organized for Miss Petito in or near Grand Teton National Park in Wyoming,” Laundrie family attorney Steven Bertolino said in the statement.
North Port Police Chief Todd Garrison said Thursday that a missing persons investigation is being conducted and no criminal charges were forthcoming at this time.
“Brian is exercising his constitutional rights, and I have to respect them,” Garrison said of Laundrie and his family. The focus of the investigation, he added, “isn’t to bring Brian in right now.”
Police describe Petito as White, about 5 feet, 5 inches tall and 110 pounds, with blonde hair, blue eyes and several tattoos, including one on her finger and one on her forearm that reads “Let it be.”

North Port police are leading the investigation, with assistance from the FBI. Petito’s family lives in New York and reported her missing to the police department in Suffolk County, New York.
Petito and Laundrie embarked on a cross-country trip in early July and were expected to be in Oregon by early October, according to Stafford.
The family received a text message from Petito’s phone on August 30, Stafford said, but they doubt that she wrote it. The family’s attorney declined to share the message or why they doubted it was from their daughter.
Petito’s family reached out to Laundrie’s parents on Friday or Saturday but they refused to answer any questions, according to Stafford.
“We understand you are going through a difficult time, and your instinct is strong to protect your son,” Petito’s parents and stepparents said in Thursday’s letter. “We ask you to put yourselves in our shoes.”

Petito and fiancé had ‘altercation’ in Utah

In August, police in Moab, Utah, encountered Petito and her fiancé as they were “engaged in some sort of altercation,” according to a report released by the Moab City Police Department.
Moab City police responded to reports of disorderly conduct on August 12 and encountered Laundrie and Petito, along with a witness whose full name was redacted from the report.
Laundrie and Petito were described as having a physical fight following an argument but “both the male and female reported they are in love and engaged to be married and desperately didn’t wish to see anyone charged with a crime,” according to the report from Officer Eric Pratt.
At the officers’ suggestion, Laundrie and Petito separated for the night, the report said. Petito was described by an officer as “confused and emotional.”

“After evaluating the totality of the circumstances, I do not believe the situation escalated to the level of a domestic assault as much as that of a mental health crisis,” Officer Daniel Robbins wrote in the police report. No charges were filed.
Robbins wrote that Laundrie said the couple had been traveling for “4 or 5 months.”