GOP Rep. Adam Kinzinger rips into Trump and Mike Pompeo for ‘getting rolled’ by the Taliban 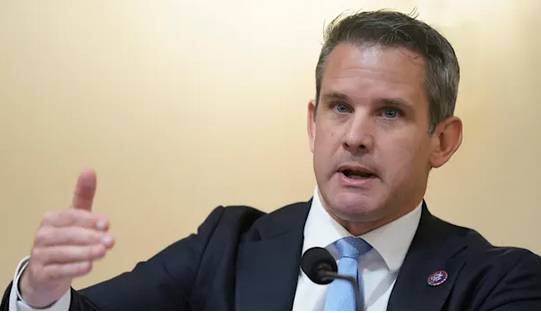 Rep. Adam Kinzinger slammed the Trump administration’s deal with the Taliban, saying on Sunday that it set the stage for the current failure in Afghanistan.

The Illinois Republican said former President Donald Trump and his then-Secretary of State Mike Pompeo are at fault for America’s “disastrous” withdrawal from the country.

“Donald Trump was publicly saying, ‘We have to get out of Afghanistan at all costs. It’s not worth it.’ Mike Pompeo meets with the Taliban and tries to ‘negotiate’ something,” Kinzinger said during an appearance on CNN.

“They ended up getting rolled almost as bad as Neville Chamberlain,” he continued, referring to the British prime minister who negotiated the 1938 Munich Agreement, which was widely panned as enabling the Nazi invasion of Poland.

“They set this up to fail,” Kinzinger said.

GOP Rep. Liz Cheney of Wyoming on Sunday also blasted Trump’s deal, calling it a “surrender” to the Taliban.

“We sat down and negotiated with terrorists,” Cheney told NBC News. “We gave credibility to the Taliban … We completely undercut the Afghan national government. We absolutely emboldened the Taliban.”

While president, Trump was eager to remove American troops from Afghanistan and end the US’ longest-running war. But he took an unprecedented step to try and fulfill that aim: negotiate directly with the Taliban. His administration engaged in a series of talks with the militant group in Qatar, and even invited them to a secret meeting at the presidential retreat Camp David for the 9/11 anniversary in 2019. Trump later reversed this decision after a Taliban attack killed a US service member in Afghanistan.

Still, Trump reached a deal with the Taliban in February 2020, which stipulated that US troops would be withdrawn from Afghanistan within 14 months on the condition that the Taliban not turn the country into a terrorist base. The agreement had been widely criticized at the time for acceding to the Taliban and excluding the Afghan government. Pompeo attended the signing ceremony and took photos alongside Taliban leader Abdul Ghani Baradar, who is anticipated to head the next Taliban government in Afghanistan.

Trump has now attempted to absolve himself from the situation and pinned responsibility solely on President Joe Biden for the Taliban’s takeover and the Afghan government’s collapse.

Though Kinzinger on Sunday attacked Trump, he also placed blame on Biden, who “could’ve easily turned this around” once he became president.

“Both parties have failed the American people,” he added.

Biden agreed to carry out Trump’s deal and pull out of Afghanistan. This week he defended his withdrawal of US troops, despite receiving widespread criticism from both sides of the aisle amid disturbing scenes coming out of Kabul of people clamoring to leave the country and the resurgence of the Taliban.