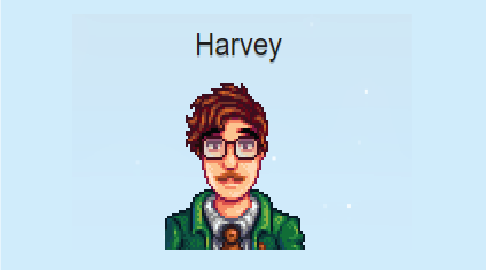 Harvey is a resident of Pelican Town’s settlement. He is the director of the town’s medical clinic and is concerned about the residents’ health. He’s one of twelve characters who can be married in Stardew Valley.

Harvey is the town doctor. He’s a little old for a bachelor, but he has a kind heart and a respected position in the community. He lives in a small apartment above the medical clinic, but spends most of his time working. You can sense a sadness about him, as if there’s something he’s not telling you.

You can offer Harvey up to two gifts per week (plus one on his birthday), depending on whether you want to increase or decrease his friendship with you. On his birthday (Winter 14), gifts will have an 8x effect and have a unique dialogue.

For loved or liked gifts, Harvey will say

A birthday gift? That’s very kind of you! I love it.

You remembered my birthday! Thank you. This is great!

For neutral gifts, Harvey will say

Oh, a birthday gift! Thank you.

For disliked or hated gifts, Harvey will say

Enter George’s house while George is there.

Harvey is giving George a private assessment. He tries to explain that if George wants to stay healthy, he needs to make some lifestyle adjustments, but George is annoyed by his advise and claims that he knows what is best for his own body. In an effort to convince George to participate, Harvey explains that he went to school for eight years so that he might help others, but his attention is diverted when he observes your entrance. Harvey tells you that you shouldn’t be there because it’s a private meeting, but George stops you by asking for a second opinion.

Enter the clinic when Harvey is there.

Harvey says he was just about to write you a letter about how you’re overdue for your annual check-up. As he’s looking you over, he notices your pulse seems high.

At the end of it, Harvey declares you healthy and says you should take care not to overwork yourself on the farm.

Enter the general store between 11am and 3pm.

You see some of the females doing dance aerobics and, astonishingly, Harvey. As the session draws to a close, Harvey appears to be out of breath, walking towards the exit door but colliding with you. When Harvey discovers you were watching, he is visibly humiliated and wishes to keep it a secret. He says he’s doing it to keep healthy, which is becoming increasingly difficult as he gets older and the stress of running the clinic by himself increases. Harvey appears depressed as a result of his inability to keep up with the rest of the group, assuming he is out of shape. He begs that you keep his dancing aerobics a secret from the rest of the community.

Walk into the clinic.

You enter Harvey’s room to find him attempting to contact a pilot using his equipment. He is surprised to receive a response, which causes his heart to rush, but he manages to respond with his coordinates before swiftly signing off. As you enter the room, you are presented with two choices:

Harvey’s reaction is the same in either case. He recognizes you and informs you that he has spoken with a real pilot. He invites you to come over to the window with him to watch the pilot fly overhead. After the plane has passed, Harvey reveals that he has always wanted to be a pilot but has been unable to do so due to his poor eyesight and severe fear of heights. He advises you not to be unhappy about it, that he understands that not everyone can reach their goals, and that this is just the way things are in the world. Harvey, who has just finished the TR-Starbird deluxe set, tries to lighten the atmosphere by asking you to look at his model planes.

Harvey writes you a letter and requests that you meet him by the railroad tracks. Visit between 9 a.m. and 5 p.m.

When you meet him there, he expresses his gratitude for your visit and promises that something will happen shortly. Marcello, a man on a hot air balloon, lands nearby, saying the balloon is yours for the next two hours, and proceeds to the Stardrop Saloon. Harvey claims that he noticed the hot air balloon rental ad in the newspaper and thought it would be a great activity for the two of you to undertake together. You can either jump in right away or ask him why he did it because you are aware of his terrible fear of heights. If you ask him, he modestly explains that, while his anxiety still plays a role, he appreciates you and your bravery, and that it should be more than enough for the two of you.
Harvey boards the hot air balloon and turns on the burner below to make it ascend, but he panics when he learns how quickly it’s rising. His emotions swings between dread and elation as he soars into the sky, eventually coming to his senses and recalling that you’re with him. He’s taken aback by how much he can see below and is delighted he’s doing it with you. You kiss shortly before the two-hour rental period expires. You are at least a half-hour late returning the balloon to the rental agency.

Between the hours of 8 p.m. and 12 a.m., enter an upgraded farm home (which must be updated at least twice).

Harvey is shown cooking and then laying the table for dinner in the cutscene. As soon as you walk in, Harvey tells you that you’ve arrived just in time and that he’s prepared angel hair pasta with clams. He inquires about the flavor of the dish as well as what you accomplished that day.
Afterwards, Harvey offers to wash the dishes and expresses his willingness to do so.

Harvey provides villagers their annual or quarterly checkups on Tuesdays and Thursdays. On most other days, he works at the clinic’s front desk in the mornings and walks around town in the afternoons.

Harvey leaves the clinic at 12 p.m. on rainy days and walks upstairs to his room, irrespective of whether there are patients in the clinic. He visits the Stardrop Saloon later on.

What is the Birthday of Stardew Velley Harvey?

His Birthday is on 14th of every Winter

Where Does Stardew Valley Harvey Lives?

He lives in Pelican Town

Is it Possible to Marry Stardew Valley Harvey?

Yes it is possible to Marry Stardew Valley Harvey.