Jonah Goldberg and Stephen Hayes resign from Fox News, citing ‘irresponsible’ voices such as Tucker Carlson as the reason for their departure. 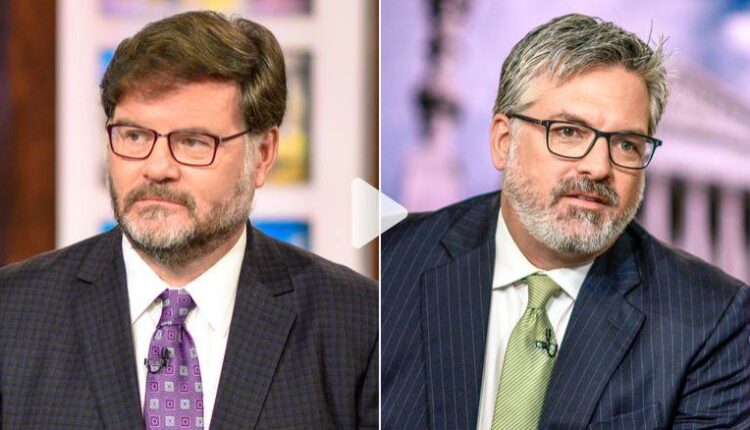 I’m surprised that Jonah Goldberg and Stephen Hayes are still employed by Fox News every month or so, when I speak with insiders at the network. After all, the two guys are conservative thinkers who refuse to bow to Donald Trump’s demands. Unfortunately, Fox viewers are rarely contacted by them. They are booked so infrequently by the network’s producers that their contracts are akin to golden handcuffs.

Hayes and Goldberg announced their departure from Fox late Sunday night. Tucker Carlson’s “Patriot Purge” propaganda film, they said in a blog post for The Dispatch, their online home, was the final straw.
“Fox News still conducts legitimate reporting,” the men said, “and there are still responsible conservatives providing vital opinion and analysis.” “However, the voices of the responsible are drowned out by the irresponsible,” according to Carlson.
CNN and other news organizations have labeled “Patriot Purge” as troubling evidence of right-wing radicalization, complete with January 6 denial and hysterical predictions of a “new war on terror” targeting Republicans, including references to Guantanamo Bay and images of waterboarding.
“This is not going to happen. And we believe it is unwise to act as if it is “Goldberg and Hayes penned the article. “There are Americans who will believe — and act on — such misinformation if it is shared loudly and long enough by someone with such a platform.”
Goldberg and Hayes were no longer able to participate.
Carlson was contacted by New York Times media columnist Ben Smith, who broke the news of Goldberg and Hayes’ resignations on Sunday, and the trollish host understandably expressed his delight, adding that “our fans would be pleased” that they are no longer on the show. The conservative movement, on the other hand, will suffer as a result.
Rep. Liz Cheney, one of the GOP’s most outspoken critics of Trump and the Big Lie, thanked the two men for “standing up for truth and calling out deadly lies” on Twitter.

A rare view inside Fox

In a phone conversation with Smith, Goldberg gave a rare behind-the-scenes look at Fox’s political strategy. “Goldberg claimed that” he and Hayes “stayed on at Fox News as long as they did because of a sense from talks within Fox that, after Mr. Trump’s defeat, the network would strive to regain some of its independence and, as he called it, ‘right the ship,'” according to Smith. “A sign that people have made peace with this direction of things, and there is no plan, at least that anyone made me aware of for a course correction,” Goldberg said of Fox’s choice to promote and publish “Patriot Purge” in early November.
The two analysts on The Dispatch on Sunday night claimed the “The “Patriot Purge” online series “creates an alternative history of January 6 that is refuted not just by common sense, but also by the reporting of Fox News’ news division.
“
Hayes and Goldberg lauded Fox’s “reporting side,” but agreed that the “opinion side” has become more extremist. “The publishing of ‘Patriot Purge’ was only the most severe illustration of a longtime practice,” they said. As a result, they’re no longer in the game. “Even if we find it sadly necessary,” they added, “we do not regret our decision.”

“Fox makes their choice, con’t,” New York Times political writer Jonathan Martin said of the resignation news. To put it another way, Fox continues to side with Trump’s populist supporters over the GOP’s more sensible, intellectual voices. Fox is deciding where it wants to go.
“Thank you Jonah Goldberg & Stephen Hayes for taking a stance for the truth against an ongoing deadly enterprise,” Olivia Troye, a former VP Pence adviser turned Trump administration critic, commented.
— Bill Kristol, a conservative columnist, praised the two men for “standing up to Fox and crying Stop” at a time when “few other conservatives are inclined to do it, or have much patience with those who urge it…”

Dan Froomkin, a liberal writer, reacted as follows: “We should all stop listening to Fox News. And journalists who report on the ground should attempt to wean America off of it…”
— “During this whole debacle, Steve and Jonah have been two of the bravest journalists,” David Brooks tweeted. “They’ve chosen positions with serious consequences. Consider donating to The Dispatch.”