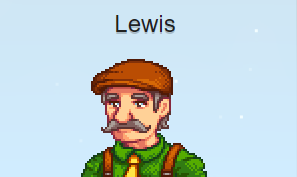 Pelican Town’s mayor is Lewis. When you first arrive in the Valley, he greets you and tells you about life on the farm, together with Robin. Lewis has some type of relationship with Marnie, as evidenced by the shorts he lost and the brown suspenders he left in her room. In addition, a message, believed to be from Marnie, may be found on a shelf in the lower left corner of his bedroom, under a coffee mug. The note is signed “-M”

When a festival is held, you will receive a letter in the mail, generally from Lewis, informing you of the location and date of the event, as well as any additional requirements.

We may presume Lewis has a good relationship with everyone in Pelican Town because no one has opposed him for mayor in the twenty years he has held the job. He was evidently good friends with the player’s grandfather, and if the player speaks to him while at The Stardrop Saloon, Lewis promises to have one extra drink in honor of your grandfather.

In parallel with his work as mayor, he is also involved in the Stardew Valley Agricultural Fund. He may send the player a letter that includes money from the fund, “to help you continue your good work,” such as using it to buy seeds.

He has never been married and has no family; all he lives for is being mayor. He sometimes questions if it was worth it.

Lewis is particularly good friends with Marnie, as shown in the “Mayor’s Shorts” story quest. He can also sometimes be found inside Marnie’s Ranch saying, “I’m just here to make sure all of Marnie’s business needs are met.” Additionally, his and Marnie’s 6-heart event confirms that they’re in a relationship, although he doesn’t want the relationship to become public knowledge

After reaching 3 hearts with Lewis, he will send you a recipe in the mail.

On a sunny day, enter the town between 7pm and 11pm.

Note: Only happens if Marnie is also at 6 hearts.

You will appear behind Lewis’ house. Lewis and Marnie are talking by the river about making their romance public. Lewis says it would undermine his authority, while Marnie says he’s too concerned for his job. In the end, Marnie says she’ll keep their relationship a secret. Afterwards, you’ll pop up and scare both Lewis and Marnie. Lewis asks you if you heard anything, and you are presented with a choice.

If you choose to keep the secret, Lewis will thank you. If you say you’ll tell everyone in town, Lewis will cry. Afterwards, Marnie will ask why you were behind the house, and your character will run away, leaving the two alone and confused.

After reaching 7 hearts with Lewis, he will send you a recipe in the mail.

What is the Birthday of Stardew Velley Lewis?

His Birthday is on 7 of Spring

Where Does Stardew Valley Lewis Lives?

He lives at Pelican Town

Is it Possible to Marry Stardew Valley Lewis?

No, it is not possible to Marry Lewis in Stardew Valley.