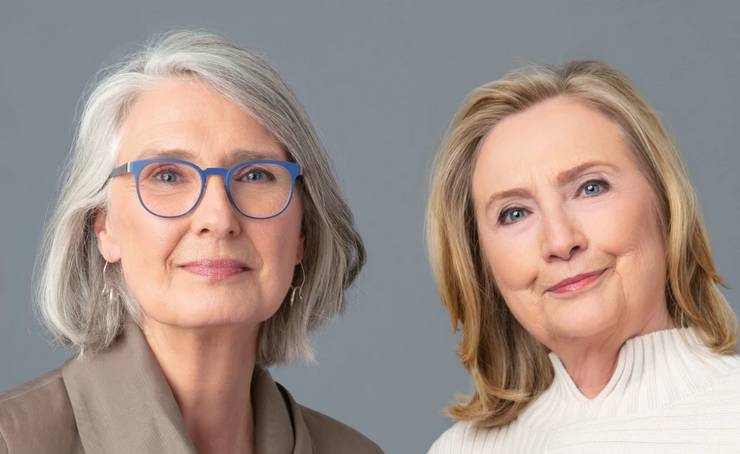 Mystery collaborations are almost as old as the genre itself. Starting some 90 years ago with the pseudonymous Ellery Queen, a joint effort between cousins, some of the most successful teams have been related. (Mother-and-son duo Charles Todd and husband-and-wife team Nicci French come to mind.) Their success raises some questions: What makes a great collaborative mystery? Is a like-mindedness born of blood or marriage essential to the process? Could partners with differing perspectives do as well, or better?

Consider the new thriller “State of Terror,” a collaboration between Hillary Rodham Clinton and best-selling mystery writer Louise Penny. While it isn’t the first pairing of a high-profile public figure and best-selling mystery writer — and not even the first in the Clinton household — it’s not an obvious partnership. The former first lady, U.S. senator and secretary of state has played out most of her storied career on the public stage and, along the way, written a shelf full of political nonfiction, memoirs and books for children. Penny covered crime stories as a radio host and journalist before writing 17 Inspector Armand Gamache mysteries set primarily in the fictional Quebecoise village of Three Pines.

The Gamache series, winner of numerous mystery prizes since its debut in 2005, is notable for its sensitive characterizations and moral quandaries. But, in many ways, the books are reboots of classic old-school mysteries; some observers liken the steady, philosophical French Canadian inspector to Agatha Christie’s Hercule Poirot. For all the ethical dilemmas and sometimes evil characters typically found in a Gamache novel, it usually ends with a relief-filled return to the kindness and camaraderie of Three Pines. Set in an idyllic world Penny has called an antidote to her own pain, the novels have brought solace to millions of readers, including Clinton, who discovered Three Pines after her bruising loss to Donald Trump in 2016’s presidential election.

Fast forward five years and one more bruising election. From the opening scenes of “State of Terror,” which begins just after the next U.S. administration is sworn in, it’s hard to imagine serene Three Pines can occupy the same planet. Newly confirmed Secretary of State Ellen Adams, a widow in her late 50s, is fresh off a disastrous inaugural diplomatic mission to Seoul. Adams is a novice diplomat, a former media mogul who turned over her empire to her daughter, Katherine, to give back to her country — “not report on the pain but do something to ease it.” Her boss, President Douglas Williams, defeated the incumbent Eric Dunn, a blowhard idiot who presided over an administration of “near-criminal incompetence.” It was a brutal race, during which Adams threw her media empire’s influence behind Williams’ rival for his party’s nomination. Now she wonders if the new commander-in-chief offered her the secretary of state job as an act of political revenge, setting her up to fail.

Before she can sort out her fractious relationship with her boss, Adams is embroiled in an international terror plot, which begins with a bomb exploding on a London bus. The novel’s shifting points of view raise suspicions about several characters’ links to the bombing: Nasrin Bukhari, a Pakistani scientist on the run from what may be her country’s military; the man who trails her to Frankfurt; first-generation American Anahita Dahir, a foreign service officer with murky family connections who receives a baffling coded text; and Gil Bahar, a Reuters journalist who had been held hostage in Afghanistan for eight months by a terror group reminiscent of ISIS-K.

When a second bomb is detonated in Paris, Dahir realizes the text contains clues about future bombings. Before her bold attempt to get the information to the secretary can thwart another attack, a third bomb goes off in Frankfurt and the journalist Bahar is seriously injured. It soon emerges that Bashir Shah, a physicist-turned-arms-dealer with an axe to grind against Adams, seems to be manipulating events. Shah is one evil component of what Dahir likens to the fearsome three-headed monster of Persian myth, the Azhi Dahaka, and what starts out as a single attack fans out into a greater conspiracy that threatens the U.S.

The bombings throw all the president’s men and women into — yes — a state of terror. It’s the beginning of a race against multiple clocks taken on by four underprepared but underestimated women — Adams; her best friend Betsy, a retired schoolteacher; her daughter Katherine; and the foreign service officer Dahir. Never has shuttle diplomacy felt so urgent: The team jets off on Air Force Three to high-stakes talks with allies in Germany, then tense meetings with leaders from Iran, Pakistan and Russia; the last is a gratifying duel of wits evocative of Clinton-Putin meetings past. Adding to the fun are Adams’ Florida run-ins with the 45 stand-in, former President Dunn (a.k.a. “Eric the Dumb”), whose incompetence laid the groundwork for the clustermuck Adams must slog through to save her country and the world.

To say more would rob readers of the pleasures of discovery in this taut thriller, a story made all the more relevant by the U.S.’s recent withdrawal from Afghanistan. Possessed of both head and heart, “State of Terror’s” layering of ethical tradeoffs, political intrigue, high-level espionage and pure evil perfectly melds Clinton’s intimate knowledge of the State Department and foreign policy with Penny’s mastery of genre mechanics.

Sometimes the contributions are easy to identify. Here’s Secretary Adams trying to get vital intel from a State Department staff laced with the remaining acolytes of Eric the Dumb: “Ellen couldn’t read these people. They were schooled in hiding their true feelings, certainly their true thoughts. This was partly because of their diplomatic and intelligence training and partly as a result of four years being punished for revealing anything resembling a fact, never mind the truth.” Here and elsewhere in the novel, there is the added frisson of wondering how much of Adams’ opinions and interactions reflects Clinton’s experiences, shared more openly under cover of fiction. That it is hard to tell is a credit to the plausibility of the plot and characterizations that are all too human.

Penny’s contributions are clear and equally effective — intricate plotting, liberal use of quotes from Shakespeare, Heaney, Tolstoy as well as an Easter egg for fans of Gamache, a noted poet from Penny’s beloved series. That, along with a cameo appearance in a scene set in Three Pines, is more than pure fan service; it is a reminder that a refuge from evil still exists in this dangerous world. But occasionally the Penny influence will pull careful readers out of the action, as in a few British/Canadian idioms a U.S. citizen would probably not use. And who knows who’s responsible for an unnecessary portrayal of media ethics that strains credulity and verges on libeling the fourth estate.

The novel’s closing pages hint of more books to come. There is ample reason to hope that, with more careful editing and further Adams adventures, the Clinton/Penny collaboration will become stronger. “State of Terror” unites two writers who advocate the same core values while possessing complementary world views across multiple borders. As a character says of the novel’s many battles, military and otherwise: “I’m an American. As flawed as it is, those are the scars of a democracy worth fighting for.”

Woods is a book critic, editor and author of several anthologies and crime novels.