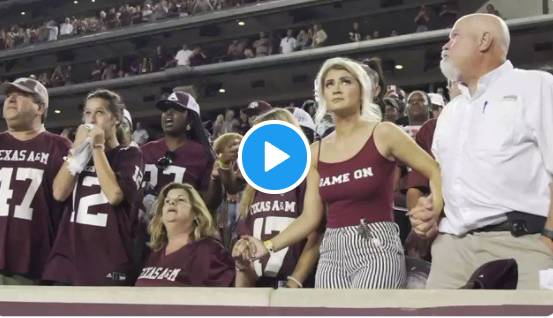 If you thought the build-up to Seth Small’s game-winning field goal against Alabama on Saturday was dramatic, wait till you see the footage of the Texas A&M kicker’s family watching the game’s closing moments.

With two seconds remaining and the game knotted at 38, Small made the greatest kick of the college football season from 28 yards, defeating Alabama for the first time in 14 years—and Small’s family was in attendance.

Small’s wife can be seen in the video supporting the senior kicker while holding his mother’s hand, who looks to be praying. The anticipation grows as you observe the family members’ gaze follow the kick to a silent stadium.

Small’s mother sobs as the kick soars past the uprights, having never opened her eyes despite the crowd’s elation. After succumbing to emotion, Small’s wife jumps the wall and rushes the field with the rest of the 12th Man.

Small stated during the game in his postgame news conference that the kick was the “third finest moment of my life”—right behind marrying his wife over the summer. Additionally, the kicker quipped that he knew precisely what to buy Jimbo Fisher for his next birthdays after nailing game-winning field goals on the coach’s previous two birthdays.

“I wasn’t sure what to gift him, so we decided as a team to get him a win,” Small explained.

The Aggies improved to No. 21 in the current AP Top 25, while Alabama fell to fifth with the loss of the reigning champion’s 19-game winning run.