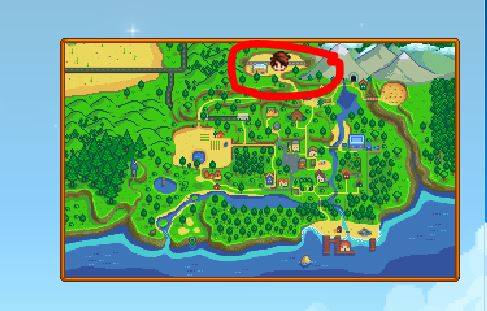 The Railroad is a location on the outskirts of The Mountain, to the north. On the 3rd of Summer in the first year, an earthquake clears the blocked route, making it accessible.

A train may run through the area on any given day between 9 a.m. and 6 p.m. If the player is outside, a message stating “A train is passing through Stardew Valley” will appear, along with the sound of a train whistle.

Items like Leprechaun Shoes, Stone, Coal, Iron Ore, Wood, and Geodes may fall off the train cars and be collected. Although the player does not need to be present when the train passes, dropped objects will vanish overnight and must be collected the same day. Even if the game is halted, the train will pass by and drop items.

A player who stands in front of a train as it arrives or attacks it with specific equipment or weapons will be thrown back and incur minor damage. The player can become trapped between the passing train and the platform, taking repeated damage, losing all health, and passing out.

There are a variety of trains that can travel through. Cars containing various materials, such as wood, stone, or coal, are the most prevalent form of train. It could also include a passenger vehicle or vehicles with graffiti on their sides.

Other train occurrences can include…

The cave northeast of the train platform has a route to the Witch’s Swamp. The Wizard will give you a series of missions to complete in order to gain access to this cave. When the player first reaches the Railroad region after fulfilling either the Community Center Package or the Joja Community Development Form, a cutscene will begin, launching off the quests. Players can use the tunnel to travel to the Witch’s Swamp at any time after performing these objectives.

The Train Platform may be found to the north of the rails. There is an empty box that is used for the quest “The Mysterious Qi.” The Harvey’s 10 Heart Event is also held here.

A stairway in the north-west part of the railroad leads to the Summit. The steps are initially blocked by a boulder that the player is unable to move. Once Perfection is attained, the player can proceed to the peak.

The Spa is located southwest of the Railroad. When you stand still in the pool, your energy and health are instantly restored.

On the outside of the spa, there is a little pond. After reading Secret Note #25, you can find an Ornate Necklace there. There’s also a painting called ‘Vista’ there. Because the water will be frozen throughout the winter, neither of these goods can be collected.