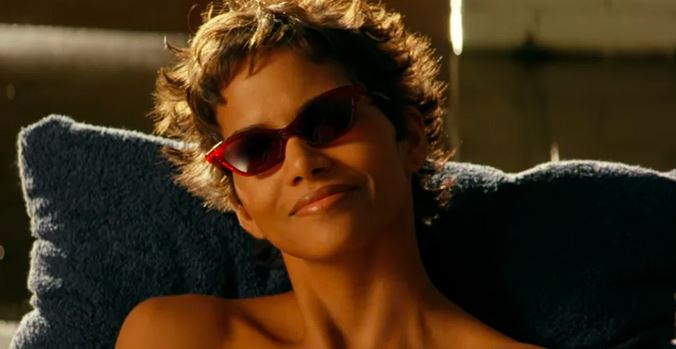 It was Berry’s first scene, and the actress was fully aware that it would be the only thing about the film that people would speak about. Swordfish director Dominic Sena disclosed that Berry was given an extra $500,000 — “$250,000 per breast,” he reportedly added — on top of her $2.5 million compensation to strip down to her underwear.

That’s a well stated fact that Berry has always refuted. In 2001, she told The New York Times Magazine, “If I were charging for them, it would cost a lot more than $500,000.” Despite this, she has never expressed regret for having Swordfish on her resume. She later told CNN, “It was such gratuitous nudity, and some people have a problem with it.” “I knew it was unnecessary while I was developing Swordfish. I never tried to justify it.”

Swordfish received mixed reviews at the time, with many critics citing Berry’s topless sequence as an illustration of the film’s excessive excesses. “Despite the existence of Halle Berry’s breasts, Hugh Jackman’s towel, and John Travolta’s soul-patch, the mind-numbing cyberspace thriller Swordfish nevertheless leaves us wondering: ‘Is that all there is?’” sniffed Bob Graham of the San Francisco Chronicle.

When viewed today, the picture appears to be stuck between the conclusion of one era of big-budget filmmaking and the beginning of another. Swordfish, which was released two years after The Matrix, which was also produced by Silver, revolutionised Hollywood action choreography, plagiarizes many of the gimmicks from that film, including its famous “bullet time” effect. Meanwhile, both Berry and Jackman were riding high on the success of the first X-Men film, which established comic book adaptations as Hollywood’s most popular blockbuster fare.

At the same time, Skip Woods’ writing is blatantly modeled after the bombastic action movies of the 1980s and 1990s – think Commando and The Last Boy Scout from Silver. Travolta plays Gabriel Shear, the chief of a top-secret organization that, depending on how you read his pompous monologues, either fosters or prevents terrorism.

Gabriel asks his accomplice, Ginger, to recruit Stanley from his post-prison exile and assist him in his latest scheme: recovering funds from the defunct DEA drug-money laundering program Operation Swordfish after his usual hacker is captured by the FBI — led by Don Cheadle’s easily-frustrated agent. Ginger, on the other hand, could not be who she appears to be. She discloses to Stanley midway through the film that she is an undercover DEA agent whose life is on the line if her cover is discovered.

Because gratuitous nudity was a staple of Silver’s 1980s action films, it’s no surprise that he made it a point to include it in Swordfish. Berry, who had a small role as an exotic dancer in The Last Boy Scout, claimed in an interview with Entertainment Weekly in 2001 that he aggressively encouraged her to make this the film where she reinvented her cinematic persona.

Silver stated, “I’ve known Halle for years, and I believed it was time for her to accomplish this.” “I think it’s appropriate for the character and profitable for the studio.” On that last point, he wasn’t entirely wrong: Swordfish concluded its theatrical run with a good $150 million worldwide gross, despite being swamped by summer blockbusters like The Mummy Returns, Jurassic Park III, and Pearl Harbor.

Berry had her own motives for accepting Silver’s offer, none of which included $500,000. Aside from X-box Men’s office triumph, the actress recently won her first Emmy and Golden Globe awards for her role in the HBO film Introducing Dorothy Dandridge, which is based on the life of the pioneer Black singer and actress. With those honors under her belt, Berry felt empowered to explore things she had avoided as a younger performer in the industry. “I finally felt like I didn’t have to prove myself anymore after the success of my Dorothy Dandridge project and the critical acclaim it garnered me,” she told EW.

Berry expressed her delight in performing the “hot girl” role in another interview with Cinema.com. “It’s the first time I’ve fully explored that side of myself on TV. For years, I said, “No, no, no,” and a lot of it was because I was uncomfortable with myself, fearful of what others might think. Finally, in the last couple of years of my life, I’ve been able to let go of all of my problems, and I’m extremely happy about it.” She also took advantage of the chance to clarify Sena’s remark about her $500,000 bonus. “I’d get a lot more money for these babies.”

Swordfish may even be argued to be the reason Berry earned her first Academy Award. Six months after the film was released, the actress reprised her role as the distraught widow of a Death Row inmate (Sean Combs) who falls connected with the prison officer (Billy Bob Thornton) who assisted in his execution in Marc Forster’s acclaimed drama Monster’s Ball. Both performers were had to strip down for a rough sex scene that was a far cry from Swordfish’s Maxim-level topless scene.

Berry, on the other hand, made it obvious that one film would not have been possible without the other. She told the New York Times Magazine, “I definitely wouldn’t have been able to do the sex scene in Monster’s Ball if I hadn’t displayed my breasts in Swordfish.” “The sex scene was shot on Day 19 of a 21-day session. Billy Bob and I dated for three weeks and then had sex, I always say. The sex scene terrified me, but courage comes in weird packages. When I look at it today, I say to myself, ‘Who is that girl up there?’

Monster’s Ball, which was released on December 26, 2001, became a major factor in the 2001 awards season, with Berry earning Best Actress prizes from a number of critical groups as well as the Screen Actors Guild. It all came to a head on March 24, 2002, when she became the first — and still only — Black actress to win the Academy Award for Best Actress. In her impassioned address, she stated, “This moment is so much bigger than me.” “It’s for every nameless, faceless woman of color who has a chance now that this door has been opened tonight.”

Berry didn’t mention Swordfish in her Oscar speech, which is understandable. In her popular Instagram page, where she often shares bikini photographs and other suggestive photographs, she has embraced Ginger’s “sexy girl” reputation. In 2019, she explained her approach to Instagram to Yahoo Entertainment, saying, “I look at it as storytelling in a little medium.” “[Instagram] used to be a platform for photographers and artists to share their work, but it’s now evolved into something entirely new. But I still like to look at it that way: it’s about storytelling, photography, and beauty.”