The Alisal Fire has forced Santa Barbara County residents to evacuate and forced the closing of a section of California’s famous Highway 101. 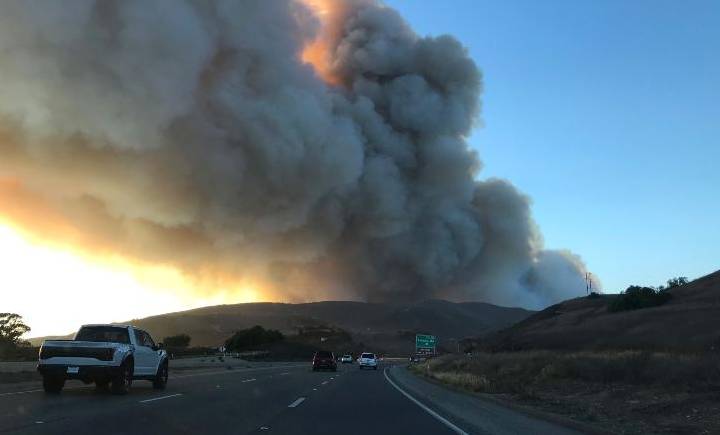 The Alisal Fire, located near Santa Barbara, California, has grown in size rapidly, prompting evacuation orders and warnings.
The fire erupted Monday afternoon near the Alisal Reservoir and has grown to around 6,000 acres, according to fire authorities. According to InciWeb, a clearinghouse for wildfire information in the United States, it remained uncontained as of early Tuesday.

Officials say the flames are threatening at least 100 structures.

“The fire is blazing in deep chaparral and is being driven by strong gusts,” according to an InciWeb report.
Winds in the region were estimated to be between 30-35 mph, with gusts reaching 70 mph.
According to fire officials, the windy circumstances prompted all aircraft assigned to the fire to remain grounded owing to dangerous flying conditions.

According to the Santa Barbara County Sheriff’s Office, the flames forced the closing of a stretch of Highway 101. At least 600 firemen are on the scene combating the inferno.
“Gusty winds continued overnight,” county fire public information officer Mike Eliason stated in an update. The fire is still threatening between 100 and 120 buildings. “Hopefully, with fewer winds, air support will be able to work the fire today.”
The Alisal Fire occurs during a disastrous fire season in California, with the National Interagency Fire Center reporting ten active major fires.
The largest is the Dixie Fire, which has destroyed over a million acres since it began on July 13. That blaze is currently 94% controlled.
According to Cal Fire, the state has seen 7,883 fires this year, scorching over 2.5 million acres.
Climate change has generated circumstances that contribute to California’s fire season, such as higher temperatures and less humidity, which results in drier vegetation.