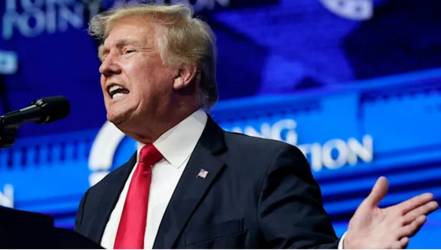 On 26 August, the packed-out Kabul Airport in Afghanistan was hit by a suicide bombing, killing 185 and injuring over 150.

ISIS-K – a terrorist group that views the Taliban as their enemy – took responsibility for the attack.

Donald Trump said that the attack wouldn’t “would not have happened if I were your president” – but repeatedly called the group by the wrong name, calling them “ISIS-X.”

Speaking to Sean Hannity on Fox News, the former President says: “[The Taliban] have people, as I said, that broke away … because the Taliban wasn’t mean enough and vicious enough. And that’s the new ISIS-X, where they broke away.”

Trump then corrected himself, saying “They’ll have an ISIS-X pretty soon, which is going to be worse than ISIS-K.”

Critics jumped at the chance to mock Trump’s misspeak.

After the attack from ISIS-K on Kabul Airport, Biden swore retaliation on the group.

Amira Jadoon, an assistant professor at the US Military Academy at West Point telling Insider’s John Haltiwanger that ISIS-K “will seek to exploit the current volatility in Afghanistan to launch attacks to increase their own political relevance and sow discord.”

Biden stuck to this word, with a drone strike being carried out against ISIS-K, with the reported planner of the attack being killed, on Friday.