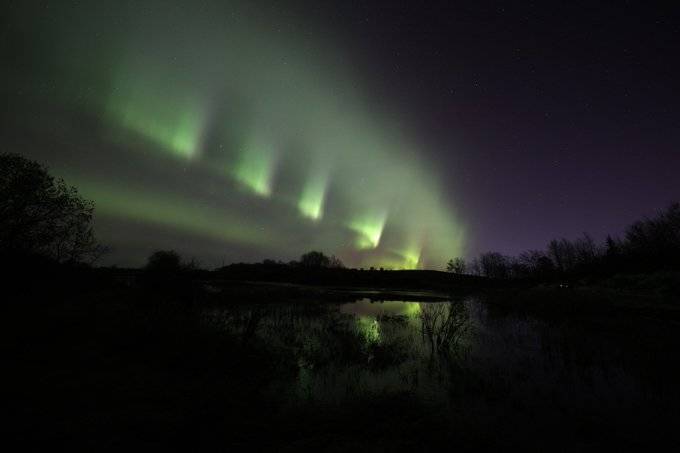 Are you unfamiliar with the terms solar flare or geomagnetic storm? We’ve got your back.

According to NASA, a solar flare is a burst of radiation from the sun caused by the release of magnetic energy linked with sunspots. Flares may last from minutes to hours and are visible via telescopes as brilliant spots on the sun.

According to the National Oceanic and Atmospheric Administration, a geomagnetic storm occurs when the exchange of energy from the sun reaches the space surrounding Earth via solar wind. These storms may heat the ionosphere — the layer of space between the Earth’s atmosphere and space – resulting in breathtaking auroras here on Earth.

Thus, the northern lights, also known as the aurora borealis, are visible to stargazers in some areas of the United States and far northern and southern regions of the planet following Monday’s “moderate” geomagnetic storm.

The aurora occurs when charged particles from the sun become trapped in the Earth’s magnetic field. The particles combine with ambient gas molecules to produce the renowned blazing red and green hues.

While a geomagnetic storm poses little danger to people, it can impair Earth-orbiting satellites and GPS, as well as interrupt certain radio communications, according to NASA.

The storm was classified as a “G2” storm by the National Oceanic and Atmospheric Administration, with “G5” being the most severe.