What is the matter with this state? A video depicts shocked Floridians being apprehended for voting. 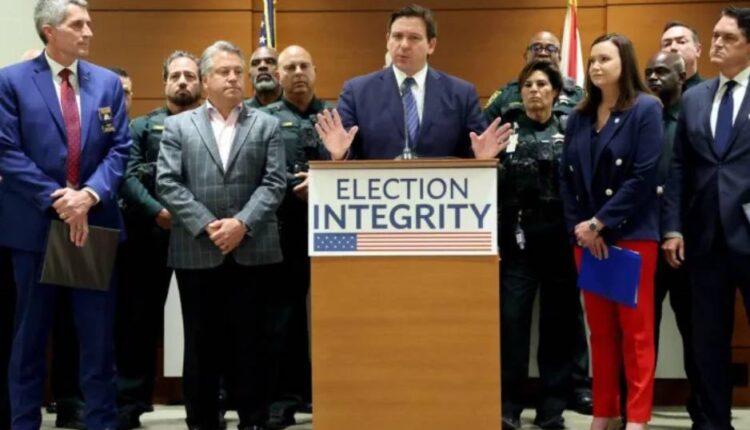 In August, when police officers attempted to arrest Tony Patterson outside of his Tampa house, he could not believe the rationale.

“What is wrong with this state, man?” Patterson protested as he was being escorted to a police car in handcuffs. “Voter fraud? Y’all said anybody with a felony could vote, man.”

Body-worn camera footage shows the confusion and fury of Hillsborough County people who were handcuffed for voting following investigations by the new Office of Election Crimes and Security of Governor Ron DeSantis.

The arrests on August 18 were carried out by state police officers accompanied by local law enforcement, hours before DeSantis attended a press conference to boast about his crackdown on alleged election fraud.

The never-before-seen footage, obtained by the Herald/Times through requests for public records, provides an intimate look at the effects of DeSantis’ efforts to root out alleged voter fraud.

During the news conference when he announced the arrests, DeSantis warned, “They will pay the price.”

The Herald/Times discovered that of the 19 people arrested, 12 were registered as Democrats and at least 13 are black.

At 6:52 a.m., as 55-year-old Romona Oliver was about to leave for work, police walked up her driveway and informed her that they had a warrant for her arrest.

A police officer informed her that she was being detained for fraud, a felony of the third degree, for voting fraudulently in 2020.

“Voter fraud?” She stated, “I voted, but I did not do any election fraud.”

Oliver and 19 others face up to five years in prison after DeSantis and state police accused them of unlawfully registering and voting.

They are accused of breaching a state law that prohibits those convicted of murder or felony sex offenses from immediately regaining the right to vote upon completion of their sentence. An amendment to the state constitution in 2018 that restored voting rights to many offenders excluded this group.

Nonetheless, as evidenced by the films, the amendment and subsequent acts by state legislators led to widespread confusion over who was qualified, and the state’s voter registration forms are ambiguous. They simply ask a prospective voter to swear under pain of perjury that they are not a felon or that their rights have been restored if they are a felon. The documents do not specify that persons convicted of murder do not automatically have their rights restored.

On February 14, 2020, Oliver, who served 18 years in jail for second-degree murder, registered to vote at the Department of Highway Safety and Motor Vehicles. She updated her address and completed another registration form six months later.

After quick eligibility checks by the Department of State, which reports to DeSantis and is responsible for removing ineligible voters from the records, she was issued a voter ID card both times.