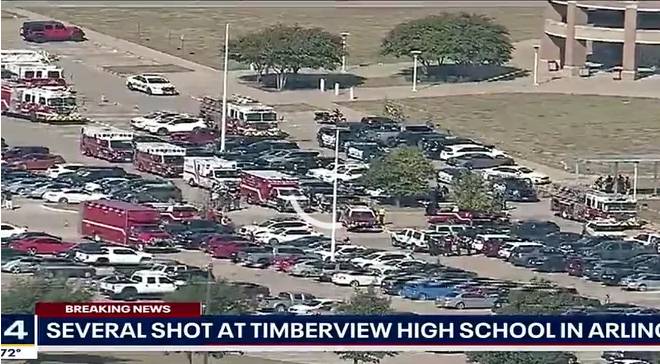 Four people were injured Wednesday in a shooting at a high school in Texas, and three were taken to the hospital, police said.

The shooting happened in Arlington on the second floor of Timberview High School, said Kevin Kolbye, assistant chief of Arlington police. Officers received calls of a shooting around 9:15 a.m., he said.

“More than two or three shots” were fired, and at least two people had gunshot injuries, Kolbye said. Some of the victims were “already in surgery” late Wednesday morning, Mansfield, Texas, police Chief Tracy Aaron said.

Police identified 18-year old student Timothy George Simpkins as a “person of interest” in the shooting and said he may be driving a silver Dodge Charger. Officers suspect the shooting happened when a student “got into a fight and drew a weapon,” Kolbye said.

“This is not a random act of violence. This is not somebody attacking our schools,” Kolbye said.

Aaron said the suspect was “considered armed and dangerous.”

One of the injured was “an older person that may be a teacher,” Kolbye said. A pregnant woman may have fallen during the incident and received medical treatment, he said. The woman did not go to the hospital, he said.

Texas Gov. Greg Abbott, appearing at an unrelated news conference at the U.S-Mexico border, said, “We grieve for everyone who’s been harmed or impacted by this in anyway whatsoever.”

Officers could not say how the student got a gun into the building.

“Be having the victims in your thoughts in prayers,” Aaron said.

Students and staff were initially locked in their classrooms and offices, but the building was given the “all clear” late Wednesday morning, the Mansfield Independent School District said in a statement.

The school district was setting up a parent reunification point nearby, police confirmed on Twitter.

The incident is the latest shooting in a school since the beginning of the school year. Several schools, finally back to in-person instruction after more than a year of remote learning, have locked down in recent weeks because of shootings, striking panic among students, staff and parents.