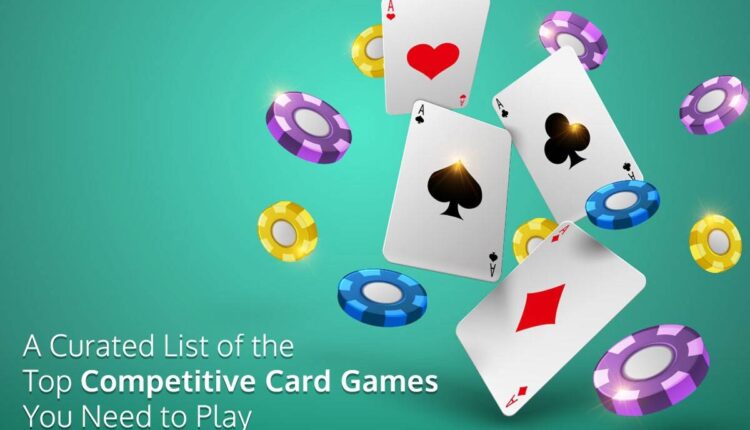 Do you fancy a game of cards? Want to compete against real-life online opponents and engage in 1V1 battles? Thanks to competitive card game apps, it is possible to quickly play a match with friends or random online opponents. These matches will keep your competitive spirit alive. You can compete to win or beat your high score. The adrenaline rush is unexplainable, and it will keep you hooked for hours.

So, if you are intrigued and wish to know the multiplayer, competitive card games you must install immediately, keep scrolling.

The classic Solitaire game is a massive hit among young and adults. If you haven’t played it, you must have heard about it. Before, it came pre-installed with Windows PC, and today you can install it on your mobile devices. While the game seems straightforward, it is a challenge to master the game and beat your opponents.

The game’s rules are similar. Players need to stack their cards and arrange them from Ace to King. The difficulty level increases as you go forward. You need to tap on the stockpile when you run out of moves and draw new cards.

The Solitaire app offers players daily challenges, and you can earn trophies or crowns. It would be best if you leveled up to get new titles. Also, you can compete against players with varying skills and experiences.

Some applications even allow players to customize the game by changing the card backs, background, and card faces. Finally, check the leaderboard if you wish to see how well you are faring.

After you play a few matches, you’ll quickly get the hang of the game.

Cube Solitaire is another classic that everyone knows or has played. The cards are arranged descendingly in alternating colors. The cards must belong to the same suit. If you wonder how to play Solitaire Cube, you must drag and drop the cards to arrange them into relevant builds. Transfer the finished builds to the foundation pile to score points.

When you have run out of potential moves, you can tap on the stockpile and get new cards. However, you can only move the face-forward cards in the tableaus in the game. Therefore, it is essential to try revealing as many cards as possible.

To avoid getting frustrated, know that some decks are unsolvable. If you get such a deck, tap on the submit button and end the game early.

Each match lasts about five minutes, which is the time you’ll get to beat your opponent. You can play 1V1 or 1VN game mode formats. The latter may even offer cash rewards to attract your attention.

In the 21st century, UNO! is a card game that has preposterously grown in popularity. You can download the application on your mobile device and enjoy a match with random opponents or your friends. The application has different levels, various versions, and features, so you don’t miss physically playing with your friends.

You can also compete in events and tournaments to win lucrative rewards. Play with strangers, friends, or family members online or by passing the device around.

The game’s rules remain the same in the online version. So, if you have played this card game before, you won’t take more than a few seconds to get started. Furthermore, you can use your house rules and ensure all players follow those rules.

Gin Rummy Plus is another popular app where you can play your favorite gin rummy card game. The app has thousands of users, so the competition can get quite stiff. While the game is deceivingly simple, it can be a challenge to master the game and learn the tricks to beat your opponents.

You can augment your winning chances by playing with online players across the globe and observing their gameplay. You can learn different tactics. You can also play with your friends or family. Moreover, you can attend exclusive events and access new games to keep things interesting. Some apps even have progressive jackpots and bonuses. You can use them to earn free coins.

You can interact with other players and make virtual friends.

Skip-Bo is an exciting game that few are familiar with, but you should try the application. The game is played with friends, and the app offers step-by-step tutorials and guides to help players learn the rules and get the hang of them. The card game will keep boredom at bay and allow you to bond with your online opponents and build friendships. Install this game to get started.

If you want to play an exciting and fun card game with your friends, you can try Exploding Kittens. It is an online card game where the rules are straightforward. Players are provided a set of cards, and they have cute kittens designed on them with bombs and laser beams. Each player will take turns, and in the end, only one player will survive. You’ll win the game if you can be the last man standing.

These competitive card games will keep you on your toes and keep the adrenaline rushing through your body. These multiplayer games are played with random online opponents or your friends and family.

Download and install them to have a great time even when you cannot step out of your home.