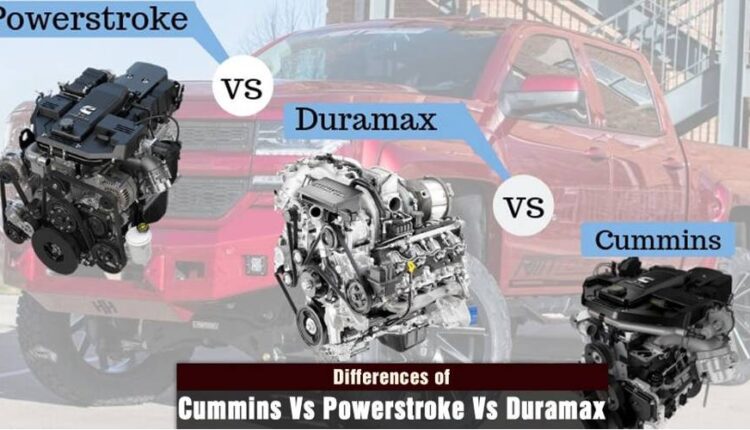 Pickup truck owners and purchasers are frequently devoted to a specific brand, especially truck buyers who purchase diesel vehicles based on their engines. General Motors’ Duramax, Ford’s Power Stroke, and Cummins are the three market leaders in the American diesel truck market.

The latter has mostly been utilized in Fiat Chrysler’s (FCA) Ram 2500 and 3500 trucks, although it can also find its engines in the Nissan Titan XD. FCA also owns VM Motori S.p.A., the Italian business that manufactures the EcoDiesel engine, a V6 with a 3.0-liter displacement that Jeep Wrangler began employing in its first diesel model a few years ago.

Is one of these engines superior to the other, or are there only minor differences? The consumer’s needs determine the best option. Here’s an overview of the distinctions between these three diesel pickup truck brands.

Which engine is the oldest?

Cummins was founded in 1919 and began supplying diesel engines to the Ram pickup vehicles of the Chrysler Corporation in 1988. In comparison, the GM Duramax range has only been in existence since 2001. Since 1994, the Ford Power Stroke moniker has been in use. Even if you exclude the brand names of the GM and Ford engines, Cummins is older. When comparing Duramax engines to Cummins and Power Stroke engines, there is little doubt that Cummins engines have the advantage in terms of age.

Which engine generates the most torque?

Towing is the primary reason huge, heavy-duty trucks exist. Torque is required for towing. Diesel engines may generate far more torque than gasoline engines. This is because their combustion process is longer and more consistent, allowing for longer connecting rods.

The torque rating of the 2021 Ford F-Series Super Duty with the optional 7.3-liter 475-horsepower turbocharged V8 engine has been increased to 1050 lb.-ft., owing partly to its new fuel-injection system (36K PSI). This is greater torque than the 2019 6.7l Power Stroke turbodiesel engine, which generates 935 lb.-ft.

Meanwhile, the 2021 Chevy Silverado HD and the comparable GMC Sierra HD Duramax diesel engine produce 910 lb.-ft. Of torque. The GMC Yukon and Yukon XL of 2021 are powered by a 277-horsepower 3.0-liter turbodiesel engine that produces just 460 ft.-lb. Of torque.

Except for the smaller GMC, all of the domestic manufacturers have comparable torque. Other elements, such as how much they weigh and how much extra equipment they must carry all of the time, impact performance.

Torque is ultimately more vital for hauling, although horsepower is still a significant consideration. With greater horsepower, the vehicle can accelerate faster regardless of whether it is carrying anything. Extra horsepower will come in handy if you need to accelerate swiftly while pulling a hefty load. Power Stroke and Duramax are fairly close in this area, with 450 for the former and 445 for the latter. Ram trucks’ Cummins engines create 400 horsepower. Again, Power Stroke wins this category with the greatest horsepower, but by a narrow margin.

Torque and horsepower are important elements in determining how much a truck can haul. However, two more considerations come into play. The first is the truck’s structural design, and the second is the engine’s strength. On the other hand, towing above 26,000 pounds in the United States needs a commercial driver’s license.

The Power Stroke triumphs once more, with a total towing capacity of 34,000 pounds vs. 31,210 pounds for the Ram. Both the Ram Cummins and the Ford Power Stroke can carry more than that, but the Duramax falls short with a total towing capability of 23,300. However, if you’re looking at these stats and don’t have a commercial license, any of these vehicles would most certainly meet the needs of the ordinary truck owner.

In the end, heavy-duty diesel vehicles are designed to accomplish work, not to save gasoline. In truth, we don’t know the fuel economy of these vehicles since they are too huge to be assessed by the EPA in the same way that light trucks are. However, because diesel engines are typically more efficient than gasoline engines, this diesel may provide a longer operating range under normal driving conditions.

However, two of the three major diesel engine manufacturers also placed their engines in smaller cars. General Motors offers the four-cylinder diesel in the Chevrolet Colorado and GMC Canyon, while Ford offers the F-150 with a V6 Power Stroke. The former engine is a 2.8-liter four-cylinder that gets 30 mpg on the highway, while the Ford Lariat has a 3.0-liter V6 diesel that gets 26 mpg on the highway. In this case, it is determined by what is more important to the vehicle buyer.

Diesel Trucks to Consider in 2021

When it comes to the latest generation of diesel vehicles, the market is ripe for the taking. According to U.S. News & World Report study, some of the top factors include both light- and heavy-duty pickups, such as:

The 6.7l Cummins engine produces an outstanding 420 horsepower and 1,075 lb.-ft. 2500/3500 Ram. of best-in-class torque. The American love affair with diesel vehicles is on the mend, partly owing to the availability of diesel engines in smaller and lighter-duty trucks. These cars not only have the torque required for towing and appropriate payload capabilities, but they are also associated with remarkable fuel efficiency rankings, exhaust-cleaning systems for reduced emissions, and drivetrains that make them cleaner to drive than ever before.