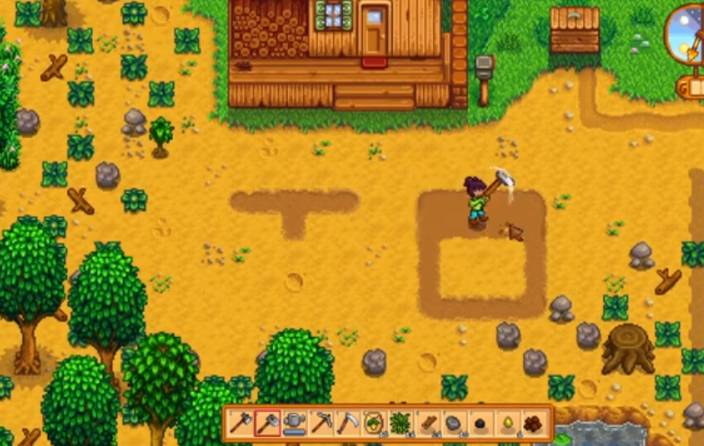 Farming has always been considered as a highly responsible action in Stardew Valley, but what’s a farm without some plans? Now, there is no right or wrong way to farm, you can farm however you please. But in your later game, your preference in planting is highly dependent on the amount of money it makes you.

The quality of your crops is determined by your farming level and dependent on the type of soil that the seed is planted in.

In Stardew valley there are three basic types of soils, there is a normal soil of just planting your seed in a normal ground plot. There is soil with basic fertilizer which is unlocked at level two of farming and quality fertilizer which is unlocked at level nine of farming. There’s also another fertilizer in the game but it is in the new 1.5 update so I’ll keep that as a surprise to those who haven’t reached that level.

For quick example, a normal soil at farming level one, there was a 91% chance for a regular crop, 6% chance for silver and 31% for gold. However, at level five of farming at the basic fertilizer there’s a 42% chance for regular quality, 35% chance for silver, and 23% for gold. You want gold quality for your crops increase it stat of health and energy, and for the value of the crop to increase.

For Spring, the crop that offers the most experience and money is ancient fruit, it can be crafted from Ancient Seeds found in the mines.

For summer, Starfruit is the second highest value crop in Stardew Valley. The seeds are sold at the Desert trader or Gunther will give it to you as a reward when 15 items have been handed in at the museum. for your first playthrough melon is the best pick or red cabbage for your second year.

For Fall, Sweet Gem Berry sells for the most and offers the most experience. The seeds are harder to get as they are sold as received from the Traveling Merchant, she’ll only sell one to five in spring or summer per season, so be sure to buy them as often as possible. You can only sell the fruit once it’s grown. Make more seeds out of the fruit using the same maker. For your first playthrough, pumpkin will be the best thing you can buy.

Speed-Gro is type of fertilizer that will increase the growing process of a crop, a normal Speed Gro increases the speed by 10%, which is unlocked at level three of farming and Deluxe Speed Gro increases this to 25%, and it’s unlocked at level eight of farming. You can increase the speed even more when leveling your level five perk where your crops are worth 10% more to unlock a perk called agriculturalist, which allows crops to grow 10% Faster, granting a max 35% with Deluxe Speed Gro. And yes, there is another speed gro available and it is included in the 1.5 update. the stat of that increases the growth rate to 33% and with your level 10 perk, that’s 43% in total.

4. Plants that Regrow or Need Replanting

Here are mention of plants that regrow after their plants have been harvested and plants that you do need to replant their seeds.

For fall, crops that regrows include Cranberries, Grapes and Eggplant but crops that need to be replanted are sweet gems, Pumpkins, Fairy Rose, Artichoke, Yams, Amaranth, Beets and Bok Choy.

5. The community center and their bundles.

If you’re going for Community Center play through instead of choosing the JoJa Mart, the plants you’ll need to plant include;

For the quality crop bundle, you’ll need to grow three out of the four items mentioned, and have the medical quality grade.

For the artisan bundle, you can either plant the trees required or choose the Batcave on your farm for 3.6% chance that the bats will drop the fruits you want. the samplings for these fruits are sold at Pierre’s and we’ll take 28 days to mature. Remember this, as they won’t produce fruit until after the 28 days, so plant the trees before they are on season.

For the bulletin board bundle, separate from the pantry bundle, there are plants you’ll need.

6. Leveling up in farming

Each level in Farming will grant you useful items for your farm. Here are the items that I believe are useful for each level. level one unlocks fertilizer, I would highly suggest using them earlier on. It also unlocks the recipe for scarecrows which should be placed on your farm to prevent crops from being eaten. Level two unlocks the recipe for a mayonnaise machine. There are four types of mayonnaise made, and they only come from coop animals. Level three unlocks the bee house, which produces honey and can be sold for flat 100 gold or place next to a flower that is grown, it will produce a type of honey depending on that flower.

Level four unlocks the recipe for preserved jars to turn any vegetable or fruit into pickles or jelly, which increases the crop sell price by twice, plus 50 Gold.

Level five allows you to choose between two professions, either animal products being worth 20% more or crops being worth 10% more.

Level six unlocks the cheese press recipe for the milk produced by the cows or grown on your farm and quality sprinklers.

Level seven unlocks the recipe for learn to make cloth out of wool.

Level eight unlocks a lot of useful items. The recipe for oil makers is unlocked. You can place corn, sunflower seeds, or some flowers to make basic oil or place truffles that pigs produce to make truffle oil. These can be sold for a lot of money, or you can craft them into a rain Totem. They’re also required in an artisan bundle for the community center. cakes are highly suggested by most experienced Stardew Valley players.

Craft juice out of vegetables to increase their sale price by 2.25 times. wine from fruits which increases their sell price by three times, or a specific beverage like coffee from coffee beans, or made from honey.

What Are The Signals That Indicate The Immediate Requirement Of A Tax Attorney?