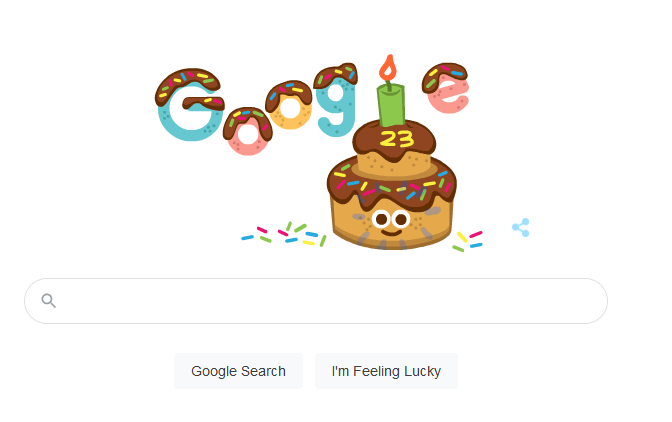 Google is marking its 23rd birthday on Monday with a new Doodle. The animated Doodle features a layered birthday cake with rainbow sprinkles and the number 23 written on the top. The search giant’s name, which is also covered in frosting and sprinkles, is floating above and the flickering green birthday candle stands in for the “L” in “Google.”

Officially established on Sept. 4, 1998, Google was co-founded by Sergey Brin and Larry Page. In 1997, Brin, a graduate student at Stanford University at the time, was tasked with showing Page around campus. The following year, the pair developed the first prototype of Google together in their dorms.

Sundar Pichai, the current CEO of Google and its parent, Alphabet, succeeded Page in 2015.

Since those early days, Google has grown to become one of the most expansive tech companies in the world. With its market dominance has come increased scrutiny from lawmakers, regulators and its own employees. In July, a group of state attorneys from 36 US states and Washington, D.C., sued Google for allegedly violating antitrust laws with its Play store for Android apps. In recent years, Google employees have protested and accused the search giant’s management of retaliating against some of its workers. Google and Alphabet employees have also formed a union so they have a “meaningful say” in decisions.