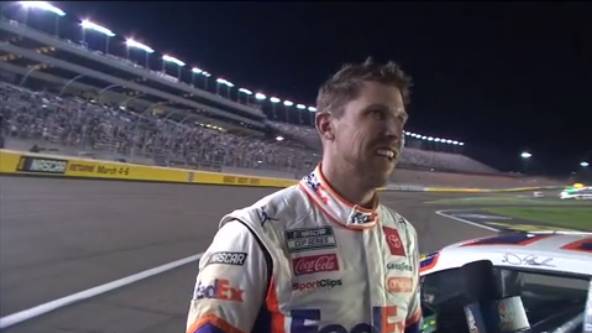 Hand it to Denny Hamlin. If there was a formula for a reduced-pressure route to the NASCAR Cup Series Playoffs’ promised land, Hamlin has hit on the right combination this year — 2-for-2.

After just missing out on the Regular Season Championship bouquet through a winless first 26 races, Hamlin’s two victories this season have come at ideal times. His Southern 500 triumph at Darlington Raceway helped him advance early in the Round of 16 opener. Sunday’s victory at Las Vegas Motor Speedway has saved Hamlin the torment of Talladega and the Charlotte Roval in the Round of 12’s remaining races, putting an automatic Round of 8 berth in his hands.

All according to plan, says Chris Gabehart, crew chief of Hamlin’s No. 11 Joe Gibbs Racing Toyota.

“It really can’t be overstated,” Gabehart said of the edge provided by the newfound Round of 12 immunity. “Again, these race teams at this level, they’re all professionals. They deal with pressure so well. It’s just part of the job in pro sports. If there’s a competitor out there, a team out there, that’s not having to deal with that pressure, it’s a big advantage. I’m happy it’s the 11 car.”

The team’s timing so far might be impeccable, but the betterment of the No. 11 group with both rules packages that the Cup Series uses has been a months-long process. Hamlin said that the higher-downforce, 550-horsepower package used at Las Vegas and other intermediate tracks had been “our bread and butter,” but acknowledged that Hendrick Motorsports — notably led by Kyle Larson — had taken the lead performance-wise with that package in the earlier portions of the season.

Hamlin said Joe Gibbs Racing had made some 550-horsepower gains this summer, but that an offseason point of focus was also devoted to improvement on the lower-drag, 750-horsepower tracks. “Chris knows I don’t like to suck on short tracks,” Hamlin said, “so they put a lot of emphasis on that.” But that focus was also strategic: The last two races of the season — at Martinsville Speedway and the title race at Phoenix Raceway — both use the 750-horsepower package.

So far, the divided focus hasn’t made the team any weaker.

“It’s really hard to be great everywhere, but we try. We try the best we can to do that,” Hamlin said. “But (Hendrick has) just been really, really strong obviously. They’re able to do great things with their cars, especially in traffic, that is very, very hard to replicate. We’re still taking steps and strides forward I believe to try to match ’em. Again, it’s very, very close. I never thought that we’ve been worse than a third- to fourth-place car on these tracks all year long. It’s just today we kind of finished the deal.”

Closing out races was a trouble spot for Hamlin earlier in the season, but the source of any frustration from the win-column goose egg was offset by an otherwise strong start. After opening the year with eight top-five finishes in the first nine races, Hamlin said in April that he would not trade for a win at the expense of overall performance: “We’re smashing everyone. I’d still rather be where I’m at.”

Multiple victories are now paired with that on-track efficiency, and at just the right time. In four playoff races, Hamlin has led 545 of a possible 1534 laps — an impressive 35.5% clip.

“We knew that this is what we’re capable of,” Hamlin said. “Really we’ve shown this all year long. It shows in laps led, top fives, top 10s. For whatever reason, whether it be bad luck, mistakes on our own, we haven’t got all the bunches of wins that we’ve had in the past. Hopefully this is the start of a really good run.”