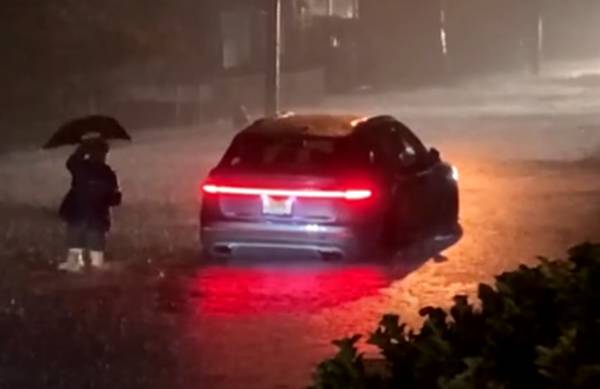 Recovery efforts were underway early on Thursday to bring back transportation systems serving millions of residents in the densely populated metropolitan area.

The governors of New York and New Jersey, who had declared emergencies in their states on Wednesday, urged residents to stay home as crews worked to clear roadways and restore service to New York City subways and commuter rail lines.

“It is not safe to drive,” New Jersey Governor Phil Murphy said on Twitter. “Our crews are working to clear and open roads, and we need everyone to stay off them so crews can safely do their job.”

Ida’s remnants brought six to eight inches (15 to 20 cm) of rain to a swath of the Northeast from Philadelphia to Connecticut and set an hourly record of 3.15 inches for Manhattan, breaking the previous one that was set less than two weeks ago, the National Weather Service said.

The 7.13 inches of rain that fell in New York City on Wednesday was the city’s fifth highest daily amount, it said.

“Right now my street looks more like a lake,” said Lucinda Mercer, 64, as she peered out her apartment window in Hoboken, New Jersey, just across the Hudson River from New York.

Mercer, who works as a crisis line fundraiser, said flood waters were lapping halfway up the hub caps of parked cars, and some residents put plastic garbage bags over their shoes to cross the street.

Subway service in New York City remained “extremely limited” while there was no service at all on commuter rail lines to the city’s northern suburbs on Thursday morning, the Metropolitan Transit Authority (MTA) said. Janno Lieber, the MTA’s acting chair and CEO, told local media it was going to take until later in the day to restore full service.

The Long Island Railroad, which is also run by the MTA, said early on Thursday that services on most of its branches had been restored but commuters should expect systemwide delays of up to 30 minutes.

At least one person was killed as the flooding inundated the New Jersey city of Passaic, Mayor Hector Lora told CNN.

The vehicle the man was riding in was swept away by the water, CNN reported.

Mark Haley of Summit, New Jersey, said getting back home after a 15-minute drive to a bowling alley to celebrate his daughter’s sixth birthday on Wednesday night became a six-hour slog through flood waters that often left him trapped.

All New Jersey Transit rail services apart from the Atlantic City Rail Line were suspended, the service said on its website.

Amtrak said on Thursday morning that it canceled all passenger rail service between Philadelphia and Boston.

Tornadoes spawned by the storm ripped through parts of Pennsylvania and New Jersey, images on social media showed.

New Jersey’s Newark Liberty Airport said on Twitter that it had resumed “limited flight operations” at around midnight after all flight activity was suspended late on Wednesday because of “severe flooding.”

More than 200,000 electricity customers were without power early on Thursday in five northeastern states that got most of the rains overnight, mostly in Pennsylvania and New Jersey, according to PowerOutage.US, which gathers data from utility companies. There were also outages in New York, Connecticut and Massachusetts, it said.