McConnell says impeachment of Biden is ‘not going to happen’ 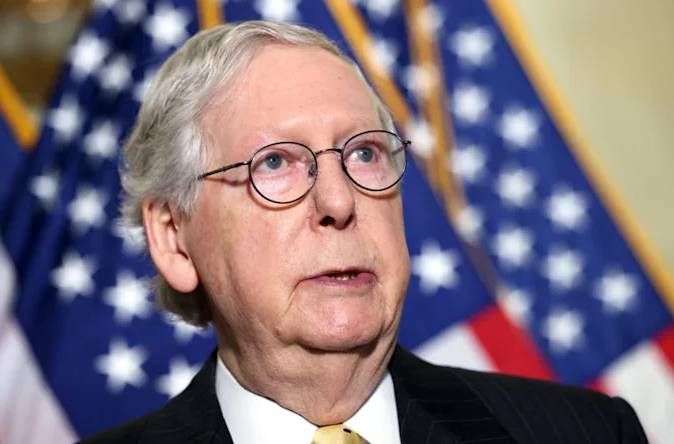 Senate Minority Leader Mitch McConnell said Wednesday that he’s confident about the GOP’s position in next year’s midterms — but dismissed the notion that President Joe Biden might be impeached after America’s much-maligned withdrawal from Afghanistan.

“Look, there isn’t going to be any impeachment,” the Kentucky Republican told a home-state crowd in Pike County, adding that the Democrats could still be in hot water. “I think they have a good chance of having a very bad election next year.”

Senator Lindsey Graham, R-S.C., a close ally of the twice-impeached former President Donald Trump, said a week ago that he believed Biden should be impeached over his decision to pull U.S. forces from Afghanistan.

The president followed an exit blueprint etched by Trump, who made a deal with the Taliban promising that the U.S. would leave Afghanistan by the beginning of May.

Biden delayed the departure to late summer, and the U.S. watched in horror as the Taliban swiftly took back a country that American troops had seized nearly two decades ago.

Still, Biden has vigorously defended his decision, insisting that “it was time” to end the war, and that Trump dealt him a tricky hand. Republicans, in turn, have pounced.

“He should be impeached,” Graham told Newsmax, a conservative news outlet. “This is the most dishonorable thing a commander-in-chief has done, maybe, in modern times.”

McConnell has made full-throated criticisms of Biden’s withdrawal, too. He issued a statement on Tuesday describing America’s messy departure from its longest war as “disgraceful and disastrous.”

But he seemed little interested in fanning far-flung conservative hopes that Biden could face impeachment.