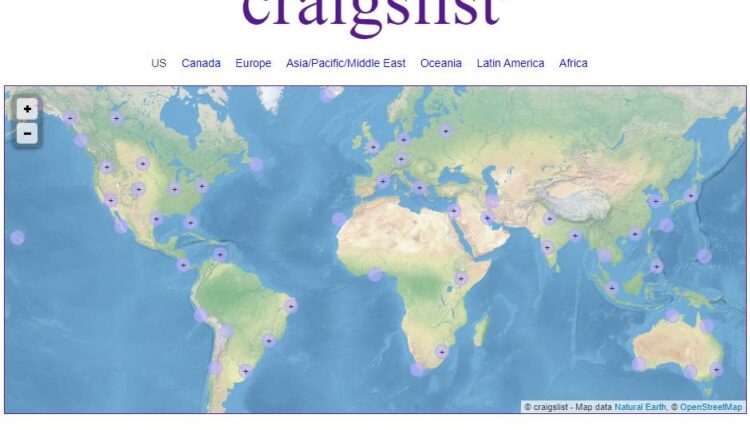 What would you say if you found out that there is a service that has not changed for 20 years? At the same time, it remains more popular than other services for the sale of used items. Even though Craigslist’s design hasn’t changed since 2000, it is still one of the most popular sites in the US. And working on it is a small team of less than 50 employees who maintain a page with several features and an old-fashioned “newspaper” user interface. How is this possible? — you inquire.

Craigslist is an e-commerce industry phenomenon, and it’s definitely worth discovering the secrets to its success. What options do startup creators have when they want to build a Craigslist-like website today? Do they need to contact an e-commerce development company or can they do it on their own? Let’s find out!

What is CraigsList and its features?

A developer from San Francisco named Craig Alexander Newmark, at the dawn of the Internet, back in 1995, came up with the idea of connecting all his friends with a mailing list network, sending them news and local announcements. Somehow, word by word, new people were brought up, and a year later, Craig created the CraigsList.org website, where anyone could add an announcement or news — and anyone could read them. The site was simple — a white background, the most standard font, no ads, no pictures, only ads. It soon became so popular that in 2000, Craig decided to expand the site to neighboring cities. He divided the site into subsites, separately for each city.

Today, Craigslist.org is a famous site not only in America but all over the world. According to statistics, it is the 492nd most visited site in the world (and 101st in the US): more than 201,000,000 impressions per month. And still the same design from the 90s, without graphics, pure HTML and CSS. Over the years of his growth, he only acquired a more extensive system of categories, a search, and a simple forum. Despite its simplicity, the site is incredibly popular.

Craigslist functions as an online classifieds forum, but it also allows you to have community discussions, post job ads, advertise services, and more. Visitors can post their own listings, apply for concerts, or take advantage of great deals. Every American who needs to sell an old mobile phone, find a guitar tutor for their child, fix a car, or find a temporary part-time job, first of all, goes to CraigsList. This is so popular that when you go to some section like “For sale: furniture”, dozens, and sometimes hundreds of pages of ads, manage to run up in a day. The main functions used by many, many people, especially those living in America, include:

You can also use the “Wanted” category in the “For Sale” section to request specific items you may need or view other people’s lists of requests.

Craigslist has never asked for money from investors and has claimed that advertising generates more than enough revenue to cover all development needs. The company’s strategy of “network first, profit later” is highly valued by its users, which has allowed Craigslist to build the largest advertising poster community in the world. Craigslist only focuses on a few sources of income, including:

Craigslist and other existing listing sites are already well established in the market. They are hard to compete with unless you find a niche that satisfies user pain points and provides value. To do this, you need to study your target audience and its modern needs, as well as familiarize yourself with what your competitors are doing.

There is always a way to stand out from strong, world-renowned competitors if you can find a value proposition and deliver what the target audience wants.

You can find solutions in areas where your competitors have failed. One of the main concerns of the Craigslist community is identifying scammers.

The only user verification on Craigslist is the email confirmation at the time the ad is posted. And the platform boasts the feature of encryption for emails. The site also has a section on general scam strategies and what users should do if they stumble upon one. However, this does not guarantee the safety of users at all. In October 2007, Craigslist made headlines after a member posted an ad looking for a babysitter and then murdered a young woman who complied with the ad.

The MVP of a product is a version that completely solves at least one problem for a potential client. Let’s look at 5 steps to building an MVP:

At this stage, a study of the market, competitors, and target audience is carried out. Based on this data, it will be much easier to determine the necessary features. If the analysis shows that the idea will not be profitable, abandon it in time.

Once you’ve researched the competitors in the market and identified the problem, it’s time to define the functionality. Do you have a list of the most useful features? For example, user registration, profile creation, search bar, communication channels, as well as ratings and reviews of sellers or buyers, user verification, geolocation identification, etc. These are the main features of the MVP that you need to include in it, and do not forget that on the MVP you shouldn’t waste a lot of resources — choose features wisely.

Step 3: Come Up With Your Own Scenarios

When all preparations are completed, it’s time to start designing. At this stage, you need to look at the product through the eyes of the user. Determine the route that will take the user from installing the application to solving their problem — the user scenario should be logical and intuitive.

Step 4. Create and launch the MVP

Is the design ready? It’s time to think about developing an MVP. The final stage is where the finished UI/UX design becomes a digital reality. During the early development phase, make sure that:

Last but not least, once the MVP is launched, gather feedback and ask potential users about their app experience. Feedback will not only help evaluate the success of the idea, but also open up new ways of development.

Craigslist is an unusual project. Despite how much users love Craigslist, the platform seems to have stopped its development a long time ago, but the technologies and demands of modern audiences are evolving and require better services to meet new challenges. Craigslist does not use its business potential and pursues other goals. With a simple outdated design, no profit motiva, and no sales and marketing department.