In the wake of accusations of environmental racism, the federal government has opened an investigation into Brooklyn’s fossil fuel plans. 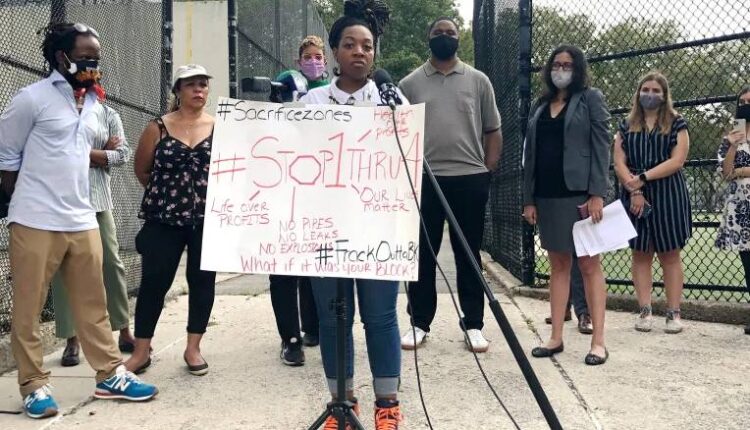 In Brooklyn, where the development of a natural gas pipeline has provoked claims of environmental racism, federal investigators have launched a civil rights probe into fossil fuel projects.

According to a letter obtained by THE CITY, the EPA will investigate whether the state Department of Environmental Conservation broke federal laws by failing to consider the impact of National Grid’s North Brooklyn Pipeline in an environmental review of related plans to upgrade the utility’s Greenpoint hub.

The proposal by National Grid to improve its facility by adding two new vaporizers to gassify low-temperature combustible liquefied natural gas, or LNG, is at the center of the controversy. The pipeline will also be extended to that facility, bringing gas for processing and storage, according to National Grid.

In August, lawyers representing a number of Brooklyn neighborhood groups filed a complaint with the US Departments of Justice, Environmental Protection Agency, Energy, and Transportation.

The pipeline’s location and operation, as well as related projects, are alleged to discriminate against communities of color along the pipeline’s almost seven-mile course, according to the lawsuit, in violation of federal and state environmental and civil rights laws.

“We’ve been saying all along that this [pipeline] project disproportionately impacts communities of color, but now we have a federal agency that is going to investigate, legally, how this project does that,” said Britney Wilson, a lawyer and director of the Civil Rights and Disability Justice Clinic at the New York Law School. “This is a great first step, and it’s really important that this racial-specific analysis and investigation be done.”

The EPA’s External Civil Rights Compliance Office will investigate the situation, according to the letter, with an emphasis on the DEC’s participation.

According to Jeff Wernick, a DEC spokesperson, all environmental permit applications are subjected to “a open and rigorous review process that promotes public involvement at every step,” in accordance with federal and state public health and environmental requirements.

The project is “completely compliance with all applicable rules and regulations,” said to Karen Young, a National Grid representative.

“We are certain that, following its inquiry, the EPA will reach this determination and dismiss the case,” she continued.

According to a letter the EPA sent Thursday to lawyers representing the community groups, the feds will look into whether the state discriminated “on the basis of race and national origin” when the DEC determined that National Grid’s plans to expand its liquefied natural gas facility in Greenpoint would not have a negative environmental impact.

The attorneys objected to the DEC’s decision, claiming that the agency’s environmental evaluation failed to include the pipeline, which they contend is an integral element of the total facility development.

The gas pipeline is now functioning between Brownsville and East Williamsburg. Greenpoint will be reached in its final phase, pending additional evaluation.

The attorneys stated that the DEC’s omission to analyze the pipeline’s impact on communities by removing it from the environmental evaluation amounted to a violation of the agency’s civil rights obligation to safeguard communities of color.

The EPA will also look into whether DEC is following nondiscrimination rules to guarantee that persons with impairments and others who speak languages other than English have access.

“I’m really excited to finally get some more information about what happened,” Wilson said.

A Year of Protests

The federal government was urged to examine not just the DEC, but also the state Department of Public Service and National Grid, according to the civil rights lawsuit. According to the lawsuit, the corporation deceived the public about the pipeline project’s purpose and the DPS unlawfully authorized it.

Residents were misled, according to the Department of Public Service. The EPA claims it is unable to examine DPS and National Grid because they do not get funding from the agency and hence are not subject to its jurisdiction.

According to the EPA’s letter, investigations into DPS and National Grid might still be launched by the federal Department of Justice, Department of Transportation, and Department of Energy.

The pipeline project, according to National Grid, is vital to ensure that its customers have access to gas for cooking, heating, and hot water. The pipeline’s construction, which began in May 2017, is still ongoing.

For more than a year, Brooklyn residents have been opposing the pipeline, claiming that it contradicts state and local climate goals to reduce reliance on fossil fuels, which release greenhouse gases when burnt.

Opponents argue that the pipeline will lead to a long-term reliance on gas, resulting in needless environmental and health risks that will disproportionately affect populations already exposed to high pollution levels.

The state’s Climate Leadership and Community Protection Act calls for an 85% decrease in greenhouse gas emissions by 2050, as well as carbon reductions, implying that the state will have to electrify and move away from gas to combat climate change.

Mayor Bill de Blasio pledged to outlaw gas hook-ups in new buildings by 2030 as part of a slew of steps to decarbonize the construction sector, including Local Law 97, which puts emissions limitations on structures beginning in 2024. The administration is working with the City Council on a law that will help them reach that objective sooner rather than later.

De Blasio’s potential successor, Brooklyn Borough President Eric Adams, has expressed support for the decarbonization initiatives, but has questioned the viability of the timelines and does not want to penalize property owners for disobedience.

Meanwhile, opponents of National Grid’s plans to expand the liquefied natural gas station and even transport LNG to the site – operations the company claims are required for electricity dependability — have been pushing back.

Lawyers for local North Brooklyn community organizations filed a suit in state Appellate Court in September to halt trucking-related activity on the property until an environmental impact assessment is completed.