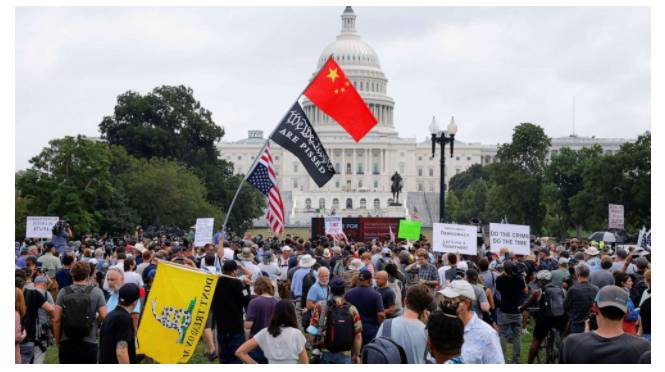 The “Justice for J6” rally was billed as a protest for defendants being detained in connection with the January insurrection at the Capitol.

At least 610 individuals have been federally charged for their involvement in the Jan. 6 riot at the United States Capitol, according to the Department of Justice. Most of the roughly 60 who remain behind bars are suspects prosecutors and judges have identified as posing a credible and ongoing threat to the public’s safety.

Many of the same far-right groups and individuals who promoted the original Jan. 6 rally-turned insurrection this time warned supporters to avoid the demonstration at all costs. Former President Donald Trump called it a “setup” but also released a statement supporting those charged.

With the House and Senate both out, no lawmakers were at the Capitol on Saturday. But preventative security measures were taken, including the reinstallation of temporary fencing around the Capitol complex.

A man who allegedly had a gun at the rally has been detained and charged with unlawful activities, Capitol Police said.

A witness told police they saw “what appeared to be a handgun” on a man in the crowd at 1:30 p.m., Capitol Police said on Twitter. The man did have a gun, police said in a followup tweet.

“At this time, it is not clear why the man was at the demonstration,” police said.

Up to 450 people turn out for rally

About 400 to 450 people were “inside the protest area” Saturday, Capitol Police said after the “Justice for J6” rally concluded.

That number did not include law enforcement, police said.

The rally fell short of expectations, with organizers having secured a permit for 700 attendees.

Organizer Matt Braynard thanked demonstrators who showed up for “trusting” him.

Despite the turnout, the event drew a large law enforcement and media presence. Capitol Police said Friday they were working with over 27 agencies from around the region to secure the event.

The “Justice for J6” rally wrapped up Saturday afternoon after about an hour of speeches, without any major known incidents.

Authorities had warned of possible threats of violence at the event, and Capitol Police officers could be seen in riot gear standing on the perimeter of the crowd as people gathered in front of the U.S. Capitol.

Metropolitan Police Department Chief Robert Contee also said in a video message Saturday that the department had security “covered” for the event and was ensuring that people could “peacefully express their First Amendment rights.”

Capitol Police said they arrested a man for a weapons violation shortly before the rally kicked off. He allegedly had a knife. Additional details were not immediately available.

No other arrests have been reported at this time.

The Capitol Police Civil Disturbance Unit also responded to a group of protestors and counter protestors near the Capitol and “separated the groups without incident,” police said.

Right before the rally kicked off, Capitol Police say they arrested a man with a knife for a weapons violation.

The arrest happened at 12:40 p.m., authorities said. No other details were immediately provided.

Knives are one of over a dozen prohibited items and activities on Capitol Grounds, along with firearms, mace, ammunition and other items.

In the days leading up to the rally, DC Police posted signage in the area of the rally that stated: “All firearms prohibited within 1000 feet of this sign.”