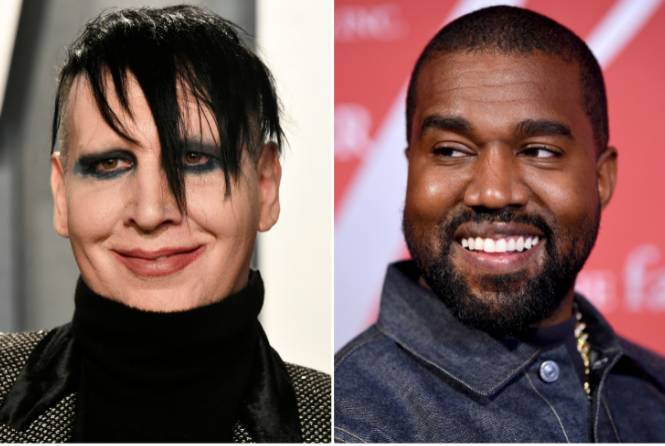 Despite Kim Kardashian and Kanye West’s united front at last night’s Donda album event, multiple sources tell E! News she was caught off guard by the rapper’s decision to include Marilyn Manson and DaBaby in the project.

One insider close to Kim tells E! News exclusively that she was “very upset” to learn of Marilyn’s involvement. The rocker is facing multiple accusations of abuse and sexual misconduct, which he has denied.

According to the source, Kim did not know that Marilyn or any of the other individuals would be there prior to arriving, explaining, “She would never have participated in something if she knew Manson was a part of it.”

A second source close to the E! reality star says she’s just as angry about DaBaby being present, who came under fire in July for making derogatory and false claims about the LGBTQ+ community. And though Kim followed through on her agreement to participate, the source says she felt “blindsided” by Kanye, since she “truly had no idea” about the extent of his plans.

According to the second source, Kim has already “expressed” her frustrations to Kanye.

However, Kim’s concerns weren’t met with much understanding, the insider tells E! News. “He wants her to realize why he included them and appreciate the art form,” the same source explains. “Kanye wanted a reaction. He wants people talking about his album and that was the approach he was taking.”

A third source close to Kanye reiterates that the rapper “is not fazed by the backlash,” because he “likes that people are talking about his album.”

“Kanye looks at everything from a creative viewpoint and tries to drown out the excess noise,” the source explains. “He doesn’t overthink the context of his actions.”

Moreover, source insists that Kanye inviting Marilyn and DaBaby was not an endorsement of the musicians’ alleged actions. The insider says that while he “may not agree” with what the two men have been accused of, he believes in separating the art from the artist.

In February, actress Evan Rachel Wood accused Marilyn of grooming and sexual abuse in an explicit Instagram post. She had previously spoken publicly about being in an abusive relationship, but never named the rocker as the alleged perpetrator.

Following the Westworld actress’ statement, numerous women came forward with their own accusations of domestic violence, including Game of Thrones actress Esmé Bianco. This prompted an investigation from the Los Angeles County Sheriff’s Department, which is still ongoing.

On Feb. 2, Manson wrote in a statement posted to Instagram, “Obviously, my art and my life have long been magnets for controversy, but these recent claims about me are horrible distortions of reality. My intimate relationships have always been entirely consensual with like-minded partners. Regardless of how—and why—others are now choosing to misrepresent the past, that is the truth.”

As for DaBaby, he has since apologized to the LGBTQ+ community for homophobic remarks made at a Miami music festival. “As a man who has had to make his own way from very difficult circumstances, having people I know publicly working against me—knowing that what I needed was education on these topics and guidance—has been challenging,” DaBaby wrote in his initial apology. “I appreciate the many people who came to me with kindness, who reached out to me privately to offer wisdom, education and resources. That’s what I needed and it was received.”

Meanwhile, a source told E! News that Kim and Kanye are not getting back together, even though she appeared in a wedding dress for the event. “She knew how much this meant to him and was honored to be involved,” an insider shared. “The wedding dress was symbolic of their relationship and for the song. It was not a vow renewal. There is still so much love between the two, but they aren’t reconciling.”