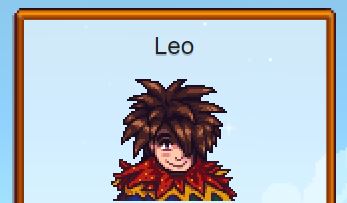 When the player earns six hearts of friendship from Leo, he journeys to Stardew Valley’s mainland, where he meets Linus, Jas, Vincent, and Penny.

Leo is a resident of Ginger Island who will not depart until the player has earned him six hearts of friendship.

On Sundays and occasional Mondays, Leo visits Ginger Island from his treehouse in The Mountain.