Out-Trumping Trump: the US governors bidding to seduce ex-president’s base 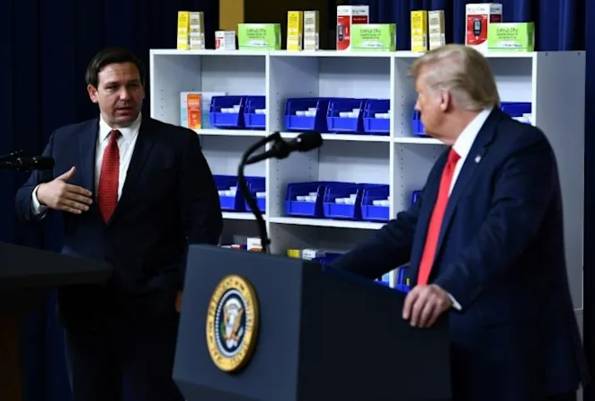 With the Afghan crisis, a resurgent pandemic and a defeat on abortion rights roiling Democratic politics, Republicans are already setting their sights on Joe Biden in 2024 — knowing their chances of being the next president depend on winning kingmaker Donald Trump’s approval first.

The deposed president is said to be considering a third White House bid himself. But even if he declines to run, he remains an outsized influence among hopefuls betting on their ability to remake themselves in his image to inherit his hyper-loyal base.

Among them, a trio of pugilistic Republican governors has embraced so-called “culture war” issues such as critical race theory (CRT) and transgender rights to cement their status as Trump’s heir apparent.

“The question is not who will be the next Trump, but who is in the best position to appeal to the Trump voter,” Republican strategist John Feehery told AFP.

“Who can best connect with working class voters who feel like they have been disrespected by the political establishment? Who can win the Fox viewer primary?”

The men in charge of America’s two largest red states, Florida’s Ron DeSantis, 42, and Texas governor Greg Abbott, 63, have spent much of the past year promoting populist initiatives that have bolstered their Trumpist credentials.

Both have railed against Covid-19 curbs and loudly supported Trump’s border wall while also restricting the teaching in schools of CRT — an arcane academic discipline investigating how racism has shaped public policy.

Abbott sparked fury among reproductive rights activists by signing a bill enacted on Wednesday that bans abortion once a fetal heartbeat can be detected, typically in the sixth week of pregnancy.

Not to be out-done on the culture wars, DeSantis has banned transgender athletes in female school sports and advocated for prohibiting “sanctuary cities” that protect undocumented immigrants.

From the smaller red states, South Dakota’s first female governor Kristi Noem has emerged as a credible rival to her southern counterparts.

Lacking the advantage of governing a state that captivates the nation every election cycle, the combative 49-year-old has been appearing regularly at Republican gatherings and on conservative cable news.

Initially declaring an emergency and ordering schools shut, Noem pivoted as the Covid-19 outbreak became politicized, resisting lockdowns and presenting herself as a champion of “more freedom, not more government.”

She has questioned the “grit and instinct” of fellow Republican governors who took steps to shut down parts of their economies during the pandemic — widely seen as a passing shot at DeSantis.

For Feehery, the Republican with the greatest chance of winning the presidential nomination will the one best able to “stay on Trump’s good side and not alienate the Trump voter.”

All three rivals are up for re-election next year, and Trump has boosted Abbott’s campaign by endorsing the Texan as “a fighter,” with an immaculate record on border control, gun rights and fighting crime.

But DeSantis — lauded by the former president as “a great guy” — appears best-positioned if Trump does not run in 2024, topping several straw polls of non-Trump party favorites for the nomination.

Feehery sees DeSantis as the frontrunner — with a resurgence in Covid-19 among Floridians the only potential threat to his political fortunes — but believes Republican internal rivalries may end up being academic.

“I personally think Trump is going to run again, and he will get the nomination.” Feehery told AFP.

Meanwhile, the Democratic-funded RGAinDisarray.com website highlights what it calls “nasty infighting” over Trump’s criticism of Republican governors seeking reelection who have failed to embrace his fantasies about widespread fraud in the election he lost.

“Sometimes politics is more about who opposes you as opposed to what you support,” Kyle Kondik, a House election analyst at the University of Virginia, told AFP.

“All three of these governors have picked fights with the Left at various times, and I think their supporters appreciate that.”