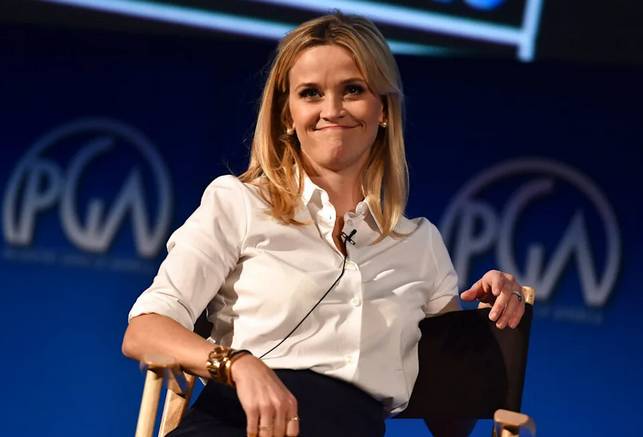 Reese Witherspoon is not apologizing for her success. Instead, she’s using her own story to create more opportunities for women in the industry.

In an interview with Kristen Bell and Monica Padman on the We Are Supported By podcast, the actress and businesswoman opened up about the barriers she faces in male-dominated industries and how it’s changed her perspective.

When speaking on the topic of “women staying in their lane,” Witherspoon pointed to a tone-deaf Time magazine story from 2015 that caricatured her and other entrepreneurs like Gwyneth Paltrow, Blake Lively and Jessica Alba, referring to them as “Domestic Divas.”

“I had started a clothing business. Gwyneth was really growing Goop. Blake Lively had a business, Jessica Alba had a business and they did a caricature cartoon of all of us,” she said. “We were in ballgowns and they stuck our heads on, and Jessica was holding an iron and I was holding a vacuum cleaner. The whole thing was so offensive that I burst into tears.”

Even though Witherspoon said the magazine has since apologized, she argues the misstep was part of a larger cultural issue that needs to be “course-corrected.”

“I’m not even talking about 10 years ago. I’m talking about 2015 when we decided, OK we’re going to be entrepreneurial, take a swing, invest our own money, our own time, our own reputation and try to do something that George Clooney has done, Robert De Niro has done — and getting lampooned for it. That message to little girls is: ‘If you’ve had success in one area, you can’t have success in another.'”

Still, Witherspoon said there was an upside, despite the negativity.

“There’s several women who’ve said acting is not for me: ‘I don’t want to be an actress anymore. I want to do things that are entrepreneurial and want to have a different kind of life for my family,'” she explained. “Media can be so punishing and I think it’s a great thing that we have other ways to get other information [online]. It’s wrought with misinformation and all sorts of complications but there’s a lot of good that came out of it too. Women talking more about art, politics, culture, finance, so important.”

Witherspoon, who earlier this month sold her company Hello Sunshine to private equity firm Blackstone for nearly $1 billion dollars, added that soon businesses will have no choice but to step up and pay attention to today’s cultural needs.

“The thing that made me happy about the [Hello Sunshine] announcement is that the banking world and private equity world value something that is about women and women storytelling in such a huge way,” she said.

“It’s on these media entities that have existed that if you don’t pivot into some mission-based work or a real understanding and recognition of cultural shifts, you’re going to become obsolete. Because consumers are really smart, audiences are smart, moms are smart, dads are smart,” Witherspoon explained. “I have a 22-year-old daughter. Her and her friends constantly educate me. I’m always in awe of how much they know and how much information is coming their way at all moments and how they synthesize it. I’ve learned so much from my kids.”

“I consciously went about this about six, seven years going, ‘I’m going to self-fund this company because I want to own this company,” she said.

“I just wanted to tell stories and all I ever knew in movies was just to be an actress,” Witherspoon explained. “No one was encouraging us to be directors or writers because nobody was out there. There was Nora Ephron. There was Nancy Meyers. And then, I didn’t know anybody else. That was impossible. I’m from Nashville, Tennessee. How was I ever going to do that? Now it’s a whole other world.”

The industry has certainly come a long way since Witherspoon started and looking ahead, she’s confident that more leaders will rise up.

“I found my purpose,” she said. “I didn’t know what my purpose was — and your purpose changes too. You get older and your purpose keeps changing. You have to keep iterating. You have to keep progressing. You have to look at new media and go, ‘Wait, is there a place for me to stand in a position of leadership here?’ Because I’ve been doing this for 30 years. I actually know a lot of stuff and I really want to be helpful to the next generation of women, to my own generation of women who haven’t been well served by our business.”