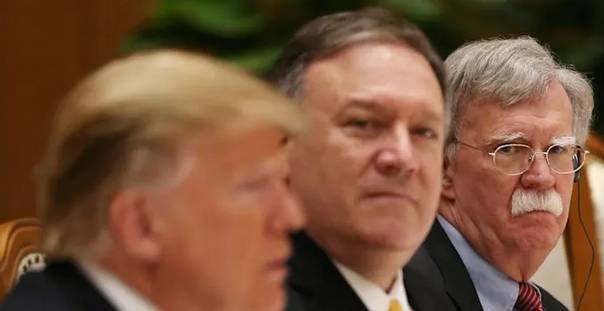 Donald Trump’s former national security advisor John Bolton criticized former Secretary of State Mike Pompeo, who negotiated a deal with the Taliban in February 2020, for distancing himself from the Afghanistan withdrawal.

“Trying to extricate yourself from this withdrawal is I think difficult if not impossible to do, especially to rewrite history about what actually happened,” Bolton told Politico in a report published Thursday. “I think that’s a prescription for Democratic attack ads that would be fatal to someone’s credibility.”

Pompeo and Trump have come under attack over their agreement with the Taliban, which stipulated that US troops be withdrawn from Afghanistan within 14 months on the condition that the militant group not turn the country into a terrorist base. At the signing ceremony in Qatar, Pompeo posed for photos alongside the Taliban leader Abdul Ghani Baradar, who is anticipated to head the next Taliban government in Afghanistan.

Bolton, who served as Trump’s national security advisor from 2018 to 2019, has said both the Trump administration and President Joe Biden are responsible for the chaotic, ongoing removal of US troops from Afghanistan.

Other Republicans who have criticized Trump and Biden over the pullout include Reps. Adam Kinzinger of Illinois and Liz Cheney of Wyoming. H.R. McMaster, Trump’s national security advisor from 2017 to 2018, denounced Trump’s Taliban deal as a “surrender agreement.”

Pompeo and Trump have attempted to absolve themselves of the situation in Afghanistan and blamed Biden for the fallout.

“I hope this Administration comes to understand that apologizing, placating, appeasing, being weak, only presents risks to American security,” Pompeo tweeted on Thursday.