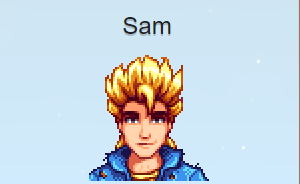 Sam is a resident of Pelican Town’s village. He’s one of twelve characters who can get married. He resides at 1 Willow Lane in the southern section of town, just north of the river.

Sam is a friendly, lively young man who enjoys music. JojaMart is where he works part-time.

Sam is frequently spotted in his bedroom, occasionally with Sebastian, practicing his guitar. Outside of his residence, he’s often spotted playing a portable video game or performing skateboard tricks. On weekends, he may be seen at The Stardrop Saloon playing pool. On Mondays and Wednesdays, he works part-time at JojaMart (if it is open), or at the Museum in the Artifacts and Minerals show (if the Community Center has been restored). In the spring, he frequents the Stardrop Saloon, in the summer, he visits the beach, and in the fall, he visits the forests west of town.

When it’s raining, he’ll either spend the day at home or go to the Stardrop Saloon for a few hours.

On the 11th of Fall, he has an appointment at the clinic.

Birthday (JojaMart open or first day Joja is closed, And not Raining)

Sam only leaves The Farm on Mondays and Fridays if the community center is rebuilt. On Saturday mornings, he spends time on the half-pipe behind the farmhouse practicing skateboard tricks.

Enter Sam’s house when he’s there.

Sam and Sebastian are jamming out in Sam’s room. Sam tells you he’s trying to get a band together, but he’s unsure what style of music to play. He asks what music you like.

No matter which style you pick, Sam says that’s the style he’s been thinking about for the band. He asks Sebastian if he’s on board too. Sebastian agrees and Sam thanks you.

Note that if you skip this cutscene, Sam’s 8-heart cutscene will not have any music playing.

In any season except winter, visit the beach between 7 a.m. and 3 p.m. on a sunny day. This is a once-in-a-lifetime occurrence that occurs only in Year 1.

Sam is watching his brother Vincent play in the sand. Sam says his dad used to take them to the beach on sunny days. Vincent asks if their father will come home. Sam says “Of course”. Vincent mentions overhearing people talk about mass military casualties. Sam tells him not to believe them, and Vincent returns to playing. Sam feels bad for getting his brother’s hopes up and asks for your opinion.

Sam tells you the band’s coming together, and Sebastian really wanted Abigail to be the drummer.