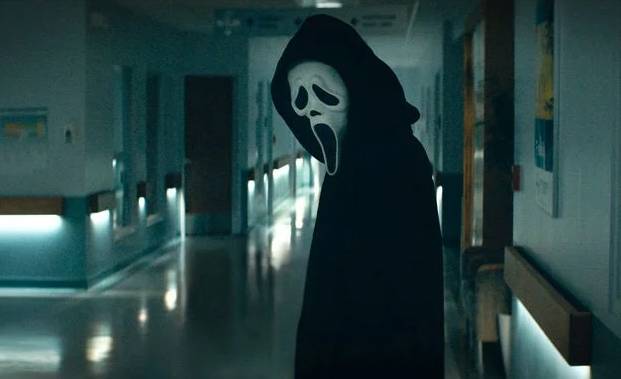 The first photos from the fifth Scream film have arrived, and they tease another another suburban horror tale of blood and anxiety. The next film, simply titled Scream, seeks to resurrect the horror series founded by horror icon Wes Craven, and the photos originally released by Entertainment Weekly bring back some old names. Scream will be released in cinemas on January 14, 2022.

The new photos feature a slew of phones, a nod (pun intended) to how Ghostface frequently contacts his victims to taunt them before executing his atrocities. There’s also the traditional suburban backdrop seen in every Scream film, as well as virtually every cast member appearing terrified for some reason.

The new photos, however, include Neve Campbell as last girl Sidney Prescott, Courteney Cox as journalist Gale Weathers, Marley Shelton as Sheriff Judy Hicks, and David Arquette as lawman Dewey Riley. The four characters come back in the fifth film after being fan favorites in previous episodes. The photos also hint numerous new cast members for the next slasher film, and as the previously revealed Scream poster reminded us, Ghostface is always someone you know, thus each cast member is both a possible victim and a suspect.

The next installment of the Scream franchise will be directed by someone other than Wes Craven. Instead, Ready or Not filmmakers Matt Bettinelli-Olpin and Tyler Gillett will direct the picture, with their Radio Silence label also producing. The screenplay is written by James Vanderbilt and Guy Busick, with former screenwriter Kevin Williamson executive producing.

Scream will restart the horror franchise on January 14, 2022, when it will be released in theaters. Take a look at the fresh pictures below: