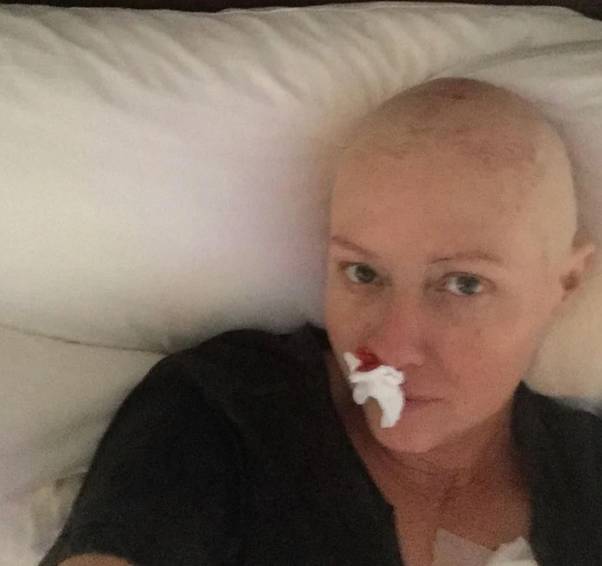 Shannen Doherty shared “honest” photographs of her stage 4 breast cancer fight in goal is to encourage her fans to be checked for the disease.

On Thursday, the former “Beverly Hills, 90210” actor shared the honest photos on Instagram, describing her grueling, multiple-diagnosis quest to “cut through the dread” of what lies ahead.

“In honor of Breast Cancer Awareness Month, I’d want to share more about my personal experience from my first to my second diagnosis.” Is everything lovely? NO, but it’s true, and my aim in sharing is that we all become more informed and comfortable with what cancer looks like,” Doherty, 50, stated.

“I hope I’ve inspired people to get mammograms, to have regular checks, to cut through the fear and confront whatever is ahead.”

The former “Charmed” actor, who was diagnosed with breast cancer for the first time in March 2015 and went into remission in April 2017, extensively recounted her treatments, which included a mastectomy, chemotherapy, and radiation.

“I had a lot of nose bleeds from the chemo,” Doherty explained, adding that she relied on wearing humorous pajamas to help her cope with the emotional and physical anguish. “I’m not sure whether any of you have had this experience. I was also exhausted.”

Doherty then disclosed in February 2020 that she was facing stage 4 breast cancer and has since kept followers updated, most recently informing them that she is “trying to stay alive.”

“I never want to operate [as if I’m dying],” she stated on Monday’s “Good Morning America.”

“I simply want to function since I don’t have any tasks to do because I’m going to keep battling to be alive.”

Doherty also stated that she is still on her “initial protocol” of therapy.

“It’s almost as if you simply want to stay on your protocols for as long as possible so you don’t run out of protocols,” she stated.

5 Questions to Ask Before Hiring a Personal Trainer