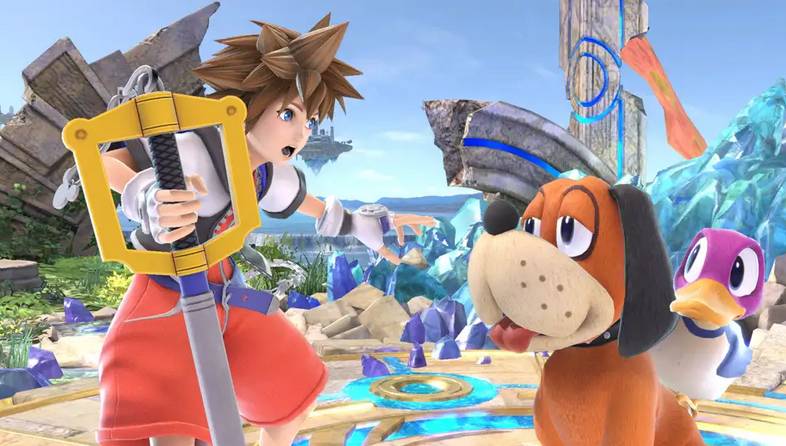 While he may not be everyone’s cup of tea, Kingdom Hearts’ Sora is officially coming to Super Smash Bros. Ultimate. But there’s a catch: He won’t be accompanied by Disney buddies like Donald, Goofy, and Mickey. In fact, it seems as if Nintendo scrubbed Sora’s appearance in the platform fighting game of Disney references almost entirely.

That’s not to say I expected to, like, be able to play as Ariel and Hercules. It just feels weird that not even Sora’s closest Disney allies show up in, say, his Final Smash attack, or the new Kingdom Hearts-themed stage. I can’t think of a better opportunity to pay homage to the rest of the series, something we’ve already seen done with distinctly non-Nintendo franchises like Mega Man and King of Fighters.

As pointed out by Twitter user zonic, Sora’s stage—which fluctuates between iconic Kingdom Hearts locations Hallow Bastion and Dive to the Heart depending on battle conditions—is probably the biggest offender. Upon transforming to its secondary aesthetics, the stage’s background is filled by iconic pieces of Kingdom Hearts artwork that have been altered to remove Donald and Goofy’s faces. Numerous references to Square Enix’s original characters remain.

The only real in-game indication that Sora has anything to do with Disney is the Mickey head medallion that hangs from his Keyblade.

Hilariously, it does seem like Nintendo is in on the joke. One of the official screenshots the developers released for Sora’s announcement (seen at the top of this story) pictures the spiky-haired protagonist alongside the Duck Hunt duo with a surprised look on his face. A dog and a duck. Get it? Granted, they don’t wield a shield or a wand, but you gotta give it up for whoever put this little scene together.

Kotaku reached out to Nintendo for comment on this story but didn’t hear back before publication.

Super Smash Bros. Ultimate typically does right by its guests. Unlike, say, the inherent oddity of seeing Ryu mowing enemies down with a machine gun in Fortnite, you can bet that Sakurai’s team did extensive research and will portray your favorite non-Nintendo characters with full respect to their home series.

We’ve come to expect stages filled with cameos from fighters’ worlds and other signature flourishes that turn a character’s inclusion in Smash into a celebration of the franchises from which they’re pulled. Nintendo’s previous efforts here are a big part of why Sora’s reveal, while exciting and fun and overall a wonderful surprise for Kingdom Hearts fans, feels a bit hollow without Donald and Goofy at his side in some way.

This is the part of the blog where I would normally make some snide comment about Waluigi being a better choice than Sora, especially seeing as he’s a full on Nintendo character with no Disney-based caveats, but I’m so beaten down at this point that I can’t even joke about it. I watched the whole presentation this morning hoping beyond hope that Sakurai would offer up a “one more thing” reveal and we’d see that stupid mustache and purple hat. But no, my beautiful boy remains a mere assist trophy.