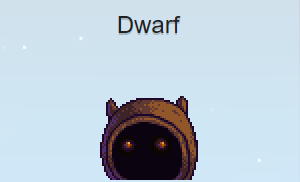 The Dwarf is a dweller of The Mines in the valley. An impenetrable rock blocks the path at first, just inside the entryway. The stone can be smashed after upgrading to a steel pickaxe. A cherry bomb (or a more powerful bomb) can also be used.

The Dwarf will begin by speaking in Dwarvish, which the player will be unable to understand. You must obtain the four Dwarvish scrolls from within the mines in order to learn Dwarf. Gunther will give you a Dwarvish Translation Guide to use after you donate them to the museum, allowing you to understand the Dwarf’s speech. You won’t be able to buy anything from the Dwarf’s shop or make friends with him until you learn Dwarvish.

The Dwarf resides immediately to the east of the mine entrance and does not leave.

The Dwarf appears to be a member of a Dwarf race. They were once powerful and sophisticated, but only remnants and artifacts remain. Krobus narrates a 1000-year battle between the dwarves and the shadow people; as a result, Dwarf suspects the player of being a shadow people spy.

Enter The Sewers after collecting 50 Friendship points with the Dwarf. You must have bought a Stardrop from Krobus.

Dwarf discovers Krobus in the Sewers and blames the Shadow People for their family’s death. Krobus retorts that he only used violence when the dwarves drove them from their native country. Krobus apologizes for what happened to Dwarf’s family, but Dwarf refuses to accept it. They both begin to fight. The player enters the Sewers and moves between them.

Dwarf screams, “Allow me to go at him! He’s heinous.” “Come and grab it, shrimpy,” Krobus retorts. Suddenly, the Wizard comes and puts an end to the struggle. He reminds them that “the Elemental Wars are long over” and urges them to make peace for the benefit of the humans who dwell nearby. Dwarf agrees and vows to stay clear from the sewers. Krobus expresses regret for the past and declares that he has no personal beef with Dwarf. To seal the deal, the Wizard performs a ‘Seal of Promise.’