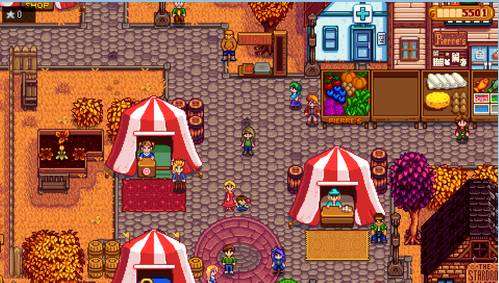 The Stardew Valley Fair is a fall celebration that takes place every year on Tuesday, October 16th. The player enters Pelican Town between 9 a.m. and 3 p.m. to join the fair. At 10 p.m., the player will be returned to The Farm after leaving the festival.

The player cannot access Pelican Town until 9 a.m. on the day of the Festival. Outside the town square, every residence and shop is “locked” and cannot be entered before or during the event.

There are numerous games in which the player can earn Star Tokens, which can be traded for rewards at the Shop near the Bus Stop’s entrance. There is a limit of 9,999 tokens that can be held.

Each of the available fixed stock goods has a purchase limit of one (until next year when they replenish). As a result, for the fixed stock, the maximum number of Star Tokens that can be used is 4,900. (2,900 if they have already purchased the Stardrop). With the exception of the Stardrop, which can only be purchased once, the Shop will be completely stocked the following year. The grange event can be replayed to win extra star points, however star tokens do not transfer over from the prior year.

A Grange Display contest is also held at the Fair, when farm items can be shown in exchange for Star Tokens. When you’re ready to have the products judged, talk to Mayor Lewis. After the judging, you can pick up all of the Grange Display objects, but they will not be automatically returned to the inventory. If the player forgets something in the Grange Exhibition, they can find it in the Lost and Found later.

Gus may be found preparing Survival Burgers north of the fair near the fountains, which the player can consume to replenish their energy bar, but this won’t be evident until they leave the festival.

The festival ends when the player leaves Pelican Town.

Bring up to nine objects to put in the grange display that best exhibit the players’ ability to participate in the showcase. The quality and diversity of the goods on exhibit will be judged, and the showcase will be rewarded with star tokens based on its placement. After the judging is finished, the items can be collected.

In a multiplayer game, the farm is shown on a single screen that is shared by all players. At any given time, only one person may interact with the display; if one player is inserting or removing things from the display, no other players may do so. When the host is satisfied with the presentation, they can begin the judging process by speaking with Lewis. The display will be scored by Lewis, and all players will be placed in the same spot. After the judging is finished, each player must speak with Lewis separately to obtain the Star Tokens.

Games can still be played at the fair after the grange display is judged.

Scoring
The points are calculated as follows:

Base Points
14 points are awarded automatically.

Number of Items
Points based on how many items are submitted, according to the formula: 2x-9 (Where x is the number of items on display).

Even if the objects supplied are uncategorized (garbage), it is always advisable to strive to fill all nine spaces because leaving any spot vacant lowers the overall score.

Animal Products, Artisan Goods, Cooking, Fish, Foraging (including Flowers and Tree Saps), Fruits, Minerals, and Vegetables are the eight categories recognized by the Fair. Each of the categories displayed in the presentation is worth 5 points, for a total of 30 points. To optimize the score, just six of these categories must be completed.

The objects that will be recognized by the Fair in each category are listed below. Any things that do not fall into one of these categories will not receive the extra 5 points, but will instead receive points depending on the sell price and quality, as detailed in the next section.

For scoring purposes, Roe and Dinosaur Egg are not regarded animal items. They are classified as unclassified (waste) objects.

This page does not feature profession benefits, Bear’s Knowledge, or Spring Onion Mastery, but they do effect the score.