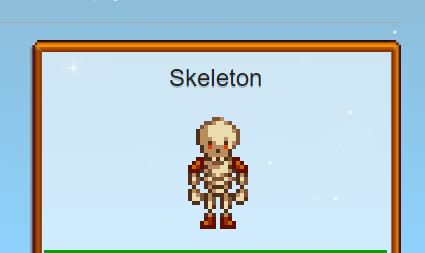 Skeletons are a type of enemy that may be encountered in The Mines. One of the Monster Eradication Goals requires the death of 50 skeletons of any variety.

By colliding with the player, skeletons will approach and attack him. They also have a longer-ranged bone throw strike that can penetrate rock. If the skeleton receives damage, this ranged attack is interrupted.

To prevent them from throwing bones, simply attack them as soon as possible. If they do throw bones, either avoid them or swing at them with a weapon, as any weapon that delivers harm can destroy them.

During the Spirit’s Eve event, the player will come upon two chained skeletons in the middle of town, which are being observed by various people.