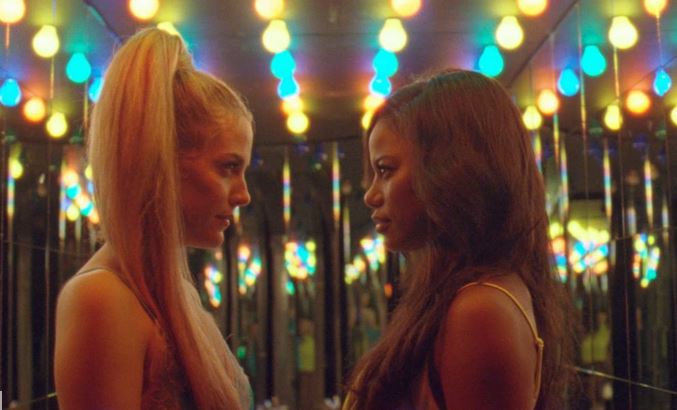 There’s a scene in the new movie Zola where Taylour Paige, playing the titular Zola, is listening to Riley Keough’s character, Stefani, say some very, very offensive things. They’re in the car on their way to Florida for a “ho trip” and Zola is starting to sense that things are not what they seem. Instead of reacting in a panic like most people would, Zola is merely annoyed. She responds to Stefani’s racist comments with a simple, “Word.” And as the next hour and a half of absurdity unfolds, she mostly maintains that same level of eye-roll ambivalence.

It’s part of what makes the movie so compelling—and at some points funny—to watch. Based on a now-iconic Twitter thread written by A’Ziah King (aka Zola), the film follows her as she navigates what most people would consider their worst nightmare. And like the thread that inspired it, the movie oscillates between laugh-out-loud moments and deadly serious “oh, shit” moments, with Paige anchoring them all.

Cosmopolitan spoke with the actor about bringing Zola to life onscreen, working with director Janicza Bravo, and why the movie helped her with a transitional period in her life.

What was your collaboration with the real-life Zola like throughout the filming process?

She’s one of my soul mates. I know her sisters; I’m close with her mom. Now it’s like family. When I found out I was going in the room for my callback, I reached out to her to make sure she was cool with it, because I’m like, “I want to know how involved you really are.” That was important to me and she was so about it. She was like, “You’re so me, it hurts.”

That must have been intimidating, to reach out to her.

Definitely intimidating. She’s a big force. She’s powerful. She’s strong. I’ve always been a bit more self-loathing and self-deprecating. She’s super confident. She knows her worth. I’ve been working on that. I feel very much worthy now, but at the time when I was doing this, I think subconsciously, I find that certain roles that come to me, it’s like either I’ve healed the thing that I’ve been called to do in the role or it’s like, Okay, you said you healed it, but did you? I was 27, turning 28, when I got this part. I was very much in the thick of my Saturn Return, transitions, sleeping on friends’ couches, doing all these odd jobs.

How do you feel like this role helped pull you through that transitional period?

I felt like it started to mark my real bloom and unbecoming. Stories I had told myself about my body or being super self-conscious, my looks, whatever. I came out of a three-year relationship. I was waiting for people outside of me to validate me, and I feel like Zola marked me validating me.

The earliest iteration of Zola was written by white men and was supposed to be directed by a white man. What do you feel the shift in writers/director allowed the movie to do that it couldn’t before?

It allowed it to fly. In the movie that you see and behind the scenes, Zola was about fighting to make sure a Black woman wasn’t erased. That she was considered and cared for, every detail, that she’s not looked at as a clown or the typical whatever you’ve projected onto her because of the voice that you read in your head. And also just the nuance of how brilliant this woman is. This could easily have been something that just becomes colonized. It’s like, “Well, we see money.

It seems like having the right person behind the camera allows Zola to be a person, not just a story.

A person, a soul, someone who went through some shit and was young and trying to hustle and make money and survive. Janicza goes through the world a Black woman and has to do that shit in our industry, constantly trying to pull up a seat at the table, explain why she’s even at the table, people making remarks as to how she got to the table. All of that gets put into this, her worth and her deserving of being there and telling the story. And the fact that she wasn’t the first or second or third or fourth choice, there were other people, but she was the last one and she was the right one.

Janicza was very clear about the journey and where she wanted it to go. It’s niche in the way that it cares for its subjects and what the subjects are. When she chose me to be Zola, I’ve never felt more valued. It’s so funny—I was telling my best friend who also does my makeup sometimes, I was like, “Isn’t it funny that now when you and whoever comes over to do my hair” That is not the Taylour from a couple years ago. I really don’t care anymore. It’s so nice.

Yeah, it’s shocking how different it feels for this movie to come at its characters from a place of empathy.

It’s compassion. There’s something in all of us, I think, that connects us all. There’s something in someone on every walk of life, even the worst people, that we would find we have some commonality somewhere. But we all just get caught up in the loop and forget the humanity and spirit of it all.

Something that I found so interesting about your performance is that Zola never seems all that panicked in this situation. She gets upset, obviously, but she’s never flustered. Tell me about that choice.

It’s a corrective Black woman’s sigh. Like, “Lord help me.” I mean, look, Zola’s a Pisces. She’s protective with her emotions but she’s super sensitive, super observant, and also, freaking out, what’s that going to do? Her quietness is also strategy. It’s survival.

You and the women you made this movie with seem super tight. How did the female camaraderie help you make the film?

There’s just so much care with women. Riley is my best friend. Beyond the work and wanting to do good work, I found someone who really cares about the inner work, the soul’s work. And then Janicza, who is also just the most thoughtful, detailed. I mean, just watching what she fought for and what she’s done to make this what it is. Honestly, if Janicza was a white man, she’d be one of the most famous directors alive. I’m just honored to have them and learn from them.

You can tell it comes from a place of love—not to be cheesy, but—in a way that only women can do.