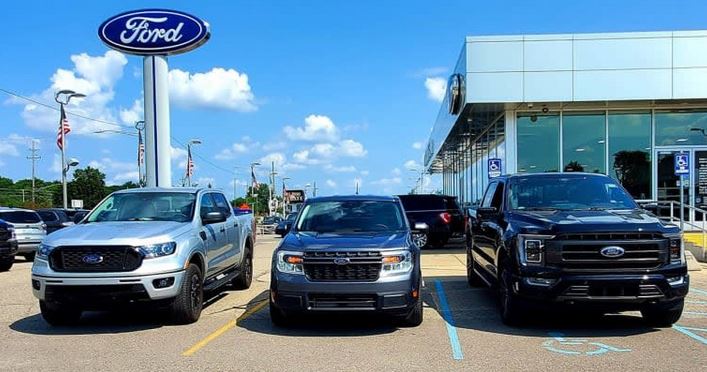 In June, Ford provided everyone with a size chart demonstrating the size of its new Maverick compact pickup relative to a Ranger, an F-150, and an F-250 Super Duty. While numbers and two-dimensional outlines can be useful for highlighting differences in scale, they work best with massive differences, like the one with the human and a school bus compared to a blue whale. It’s hard to visualize potentially stark differences when the spreads are inches or a couple of feet, especially in comparison to the sizes of Super Duty pickups. The Maverick Truck Club has been trying to make the second-best size comparison after seeing the new truck in person: Get good photos of it next to its siblings. The latest image, submitted to the forum by Todd Grace, begins to answer the question, “Now how small is the Maverick really?”

The 2022 Maverick XLT in Carbonite Gray is parked in front of a dealer between a Ranger on the left and an F-150 on the right. Though there is a bit of wide-angle lens distortion, it’s minimized by the picture taken front-on and the trucks parked close — and the Maverick looks truly dinky. Going back to the Ford graphic, the Maverick is nigh on 12 inches shorter in length than the Ranger, and about 4.6 inches lower. It’s the width disparity that stands out in the picture, turning the Maverick into the star of “Honey, I shrunk the pickup!”

There are plenty of other efforts at the site. At the end of June, forum user “balucipher” snagged photos of a Maverick next to a Ford Explorer. Sure, the crossover driver is going to be looking down slightly at the pickup driver, but here again it’s the difference in width that makes the Explorer look like the stout varsity football player compared to the Maverick’s small-for-his-age middle schooler. Another photo on the forum from July shows a Maverick behind an F-150 outside an auto show. Camera distortions play a bigger role here, but even so, the Maverick comes off as truly runty. Similar work has gone on in back; in July, two forum users laid tape in the beds of an F-150 and a Ranger marking out the size of the Maverick bed in relation. The F-150 example leaves out a line of tape that would have made a better demonstration, but the Ranger example is telling. And over on Reddit, poster “bowhunterexpert,” who describes himself as 5′ 7″, got pictures of himself next to and inside the Maverick.