The Taliban have access to US military aircraft. Now what happens? 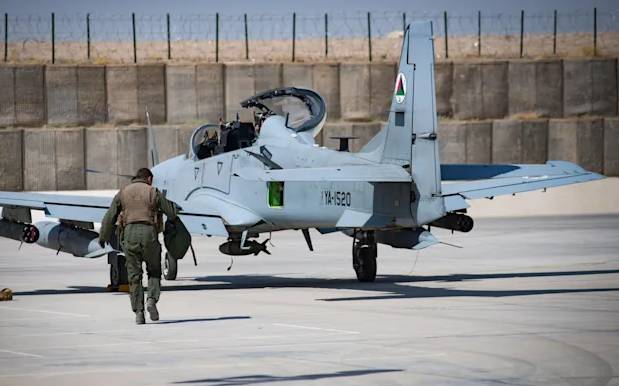 Once the Taliban seized control of Afghanistan’s airfield in Kandahar on Friday, it didn’t take long for photos to appear on social media showing Taliban fighters posing with military helicopters such as U.S.-made Black Hawks and Soviet-made Mi-17s.

After the group took over Mazar-i-Sharif airport this weekend, more photos followed, this time of Taliban members standing next to an A-29 attack plane and MD-530 utility helicopter.

Now, with Afghanistan under Taliban control, the question is no longer whether the organization will gain access to the Afghan air force’s inventory of U.S.-provided planes and helicopters, but what it plans to do with them — and what the U.S. military can do in response.

The Afghan air force operated a total of 211 aircraft, with about 167 planes and helicopters available for use as of June 30, according to a July report by the Special Inspector General for Afghanistan Reconstruction.

During a briefing at the Pentagon on Monday, Maj. Gen. Hank Taylor, the Joint Staff deputy director for regional operations, said he had no information about whether the U.S. military would take steps to prevent aircraft or other military equipment from being captured or used by the Taliban.

Bradley Bowman, a former Black Hawk pilot who served in Afghanistan and has sharply criticized the U.S. withdrawal, told Defense News “there’s no doubt that they’ve captured hundreds of Humvees and artillery and other equipment — and aircraft.”

“This should be deeply, deeply troubling to Americans, not only because we help fund those and provide those, but because how the Taliban could benefit,” he added.

As the Biden administration considers its path forward, its biggest priority should be the safe evacuation of Americans from Afghanistan, Bowman said. Then, it should destroy the U.S. equipment remaining in Afghanistan, as well as all planes and helicopters left behind by the Afghan air force.

“If we do that now, then I could see the Taliban changing its disposition toward the evacuation operations in Kabul,” he said. “So get all the Americans out, do as best as we can getting our Afghan partners out.

“Once that’s done … then why the heck wouldn’t we destroy every rotary wing and fixed aircraft that the Taliban has captured? I think we absolutely should.”

The Afghan air force operated 23 A-29 attack planes, four C-130 cargo planes and a total of 33 militarized versions of the Cessna Caravan, some of which were configured for a light attack mission, according to the special inspector report.

It also flew about 150 helicopters, which included the American-made UH-60 Black Hawk utility helicopter and armed MD-530s, as well as the Soviet Mi-17, which the Afghan air force was in the process of retiring.

Of the Afghan air force’s inventory, perhaps the most advanced is the A-29 Super Tucano, a turboprop attack plane built by Brazilian aerospace manufacturer Embraer and modified by Sierra Nevada, an American defense firm that integrates the aircraft with U.S.-made sensors and weapons.

Unlike a fighter jet built for speed and maneuverability in a dogfight, the A-29 is optimized for counterinsurgency missions where an aircraft needs to fly slow and low to strike targets on the ground. The aircraft can be flown by relatively inexperienced pilots and operated in austere environments.

Those characteristics made it a great fit for the Afghan air force, which was being built from the ground up, but it’s not technology that can threaten the U.S. military in future engagements with the Taliban, according to Gen. Mark Kelly, who leads Air Combat Command.

“But suffice to say that the technology that’s in the A-29 is not cutting-edge technology,” he added. “When you look at the airplane’s range and speed and computer power and lifting capability … it’s not something that, frankly, concerns us.”

While the Taliban could seek to sell captured aircraft, none of the planes or helicopters operated by the Afghan air force contain sensitive technologies that would be useful to nations like China or Russia, said Richard Aboulafia, an aerospace analyst with the Teal Group.

“Truth be told, if the Russians or Chinese wanted to get their hands on a Super Tucano or early model Black Hawk it wouldn’t be that hard,” he said. “They were equipped in a pretty low-tech way.”

The Taliban would face a long list of obstacles if it sought to operate the equipment itself, using the remaining airplanes and helicopters to form the basis of an ad-hoc air force.

“”They may actually be able to get it airborne,” he said, “but they’d probably be more dangerous to their own wellbeing than they would [be] to people on the ground.”

Eventually, the Taliban could find qualified pilots, “but as far as a threat to the region, I don’t think it’s something that’s a credible threat that we are that overly concerned about,” Kelly added.

An even larger hurdle for the Taliban would be the cost, expertise and logistics associated with maintaining the aircraft, an expensive proposition that involves servicing aircraft before and after flight, conducting repairs and buying spare parts.

However, it’s not an impossible problem to solve, Bowman said.

“I’m not naïve enough to not be able to envision a scenario where maybe — maybe — they could find pilots, that maybe the former Afghan air force pilots would be coerced to come over to their side,” Bowman said. “And it’s not inconceivable that foreign powers who aren’t aligned with the United States could help.”

But Aboulafia noted use of the aircraft’s weapons — either on the citizens of Afghanistan or against other nations in the region — could ultimately undermine the Taliban’s goal of maintaining control of the country.

“The more they use conventional military equipment, the more they make themselves a target. If they were to make trouble, it would be doing what they did before 9/11: harboring terror groups,” he said. “There’s obviously not a lot of organized internal resistance in the country. They don’t seem eager to pick a fight with countries near them, and it wouldn’t go well if they did.”

The ones that got away

Not all military aircraft were left in Afghanistan for the Taliban to recover.

The Afghan air force has also sought safe haven in Uzbekistan, although it is unclear how many aircraft and personnel have flown into the country over the past several days.

The office also stated that three more A-29 attack aircraft requested permission to land on Aug. 15 and were given MiG-29 escorts by the Uzbek military, but one MiG-29 and A-29 collided during flight. The pilots of both aircraft ejected safely.

On Aug. 16, the office rescinded its statement in full, providing no elaboration on how many Afghan aircraft had landed in the country.