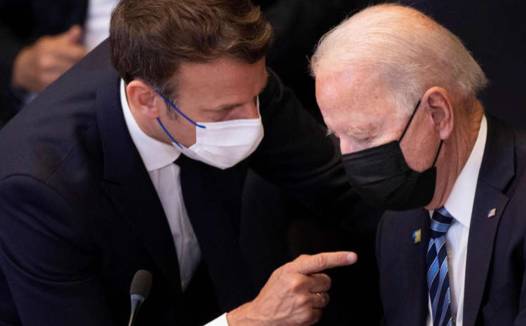 The White House’s readout of a call between Joe Biden and Emmanuel Macron on the crisis in Afghanistan leaves out an impassioned plea from the French president that the US and its allies have a “moral responsibility” to evacuate Afghan allies.

The French government’s readout of the conversation was released on Friday, a day after the call took place, and indicates that Macron emphasised ensuring the safe evacuation of Afghan citizens who assisted American and European troops over the past 20 years at great risk to themselves and their families.

According to the readout, Macron described the mission to evacuate allies as a “moral responsibility” and told Biden: “We cannot abandon them.”

The Élysée said Macron “underlined the absolute need to ensure rapid and concrete coordination among allies on the ground to continue the evacuations”.

The White House version, however, made no mention of a “moral responsibility” to evacuate Afghan allies.

“They lauded the tireless efforts of their personnel working closely together in Kabul on the evacuation of their citizens, the brave Afghans who have stood by us and our Nato partners, and other vulnerable Afghan nationals,” the White House said in a brief description of the call.

“They underscored the importance of continued close coordination among allies and democratic partners on Afghanistan, including through multilateral fora, on the provision of humanitarian assistance and support for refugees.”

The Guardian has contacted the White House for comment.

Tens of thousands of international citizens and Afghans who collaborated with US and Nato forces remained stranded in Kabul on Friday, as governments grappled with an overwhelming backlog of visas and Taliban checkpoints which were preventing people safely reaching the airport.

The urgency of the evacuation of Afghans allied with US and Nato forces, and western media organizations, has been compounded by recent reports of Taliban fighters going door-to-door looking for those who had worked with the previous regime and threatening them.

The Biden administration has faced bipartisan criticism over the haste of the withdrawal and the huge backlog in processing special visas for Afghan citizens who assisted US forces.

Earlier this week, Biden set a 31 August deadline for complete US withdrawal, defending the swift exit by saying there would have been no way for the US to pull out of the country “without chaos ensuing”.

The US president said he would consider extending the deadline if American citizens still remained in need of evacuation, but did not mention Afghan allies in the calculation.

“We will determine at the time who is left and if they are not out we will stay,” he said.

The French president’s plea comes amid criticism that he pandered to the far right in a speech earlier this week, after he said France should have a robust plan to “anticipate and protect itself from a wave of migrants” from Afghanistan.

The comments, made in a televised address, came hours after desperate Afghans trying to flee the country were filmed clinging to the wheels of a plane and falling to the ground.

Macron, who is expected to seek a second term in office in next year’s presidential election, stressed that France would not abandon Afghans who had worked with its forces and with the European Union offices in Afghanistan.

But he added that “dealing with those fleeing the Taliban would need an organised and fair international effort” and that “Europe alone cannot assume the consequences of the current situation”.