Who Let Venom: Let There Be Carnage In on the Joke? 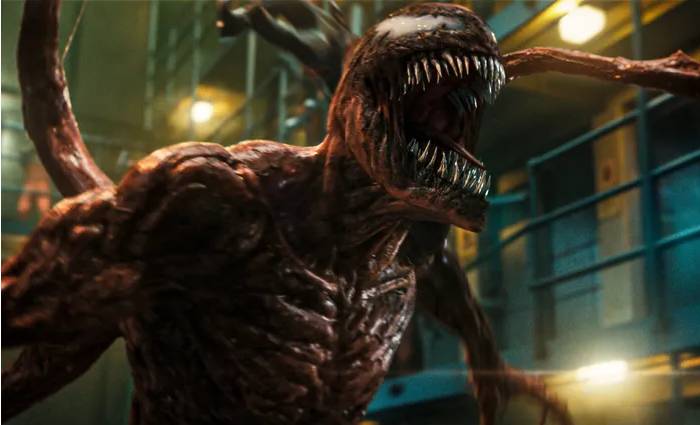 Everyone’s in on the joke in Venom: Let There Be Carnage, and it’s more of a bummer than I could have imagined. The 2018 Venom wasn’t exactly a paragon of subtlety, restraint, or good filmmaking, but there was a crackpot charm to it that had everything to do with how most of the cast acted as if they were in a gritty comic-book adaptation while Tom Hardy … did not. Muttering and soaked in sweat, Hardy lurched through the movie insistent that the saga of how a swaggering investigative journalist named Eddie Brock becomes host to a cannibalistic alien symbiote was, in fact, a buddy comedy. His performance felt like an assault on the implicit promise of any super(anti)hero origin story — that whatever sacrifices and losses its main character may accrue, they will be blessed in return with a modicum of cool. Eddie never became cool. Eddie ate a rotting chicken carcass out of the garbage and jumped into the lobster tank at a restaurant, and even after saving the day, he did not get the girl but did keep the alien, with whom he constantly bickers.

Eddie is still not cool in Venom: Let There Be Carnage, but his shambolic lack of dignity is less entertaining because everyone around him has started doing shtick too. Chief among them is Woody Harrelson as serial killer Cletus Kasady, who invites Eddie to prison to interview him and then bites his hand, getting a taste of extraterrestrial-infected blood that enables the murderer to sprout a symbiote all his own — the titular Carnage. Does Cletus-as-Carnage yell the film’s subtitle at one point, just for extra emphasis? You bet he does. He also gives the damnedest pronunciation of origin I’ve ever heard (it’s something like o-REE-gin) and wears a terrible wig that’s different from the one he wore in the Venom stinger. Cletus wants only to reunite with the object of his obsession, Frances Barrison — a mutant he met in reform school who has spent most of her life in a secret facility. As an adult, she goes by “Shriek” and is played by Naomie Harris, who happens to be 15 years younger than the actor playing her childhood sweetheart. Harris glowers and gives good deranged villainess face but has shockingly little to do — she barely gets to use her powers! — whereas Harrelson has too much. His exhausting performance is barely mitigated by a nifty bit of animated backstory and his tentacled stretches as a red creature who slaughters countless people in bloodless, PG-13 fashion.

About that: The first time Venom spots Carnage, it yelps “That is a red one!” and tries to exit. This tossed-off implication that Carnage is a phenomenon of a sort Venom has encountered before is as far as the movie goes in terms of lore. And while there’s a relief to being unburdened of superheroic exposition, the sheer lack of curiosity any of the characters have about the new murder monster in their midst attests to how slapdash this sequel is. It’s so obviously shaped by fan response that it feels like the movie equivalent of someone who went viral online and now can only repeat themselves to diminishing returns in an attempt to hawk merch while they can. Hardy, who was responsible for most of what made the first film good, seems to be one of the primary reasons the sequel feels so desperate. The actor — who spends much of the film dressed in Eddie Murphy’s outfit from Beverly Hills Cop for reasons unclear beyond the first name his character and the comedian have in common — shares a story credit with writer Kelly Marcel. The result is a script that devotes an awful lot of time to Hardy-as-Eddie talking to himself-as-Venom.

The odd couple argues about Venom’s diet of chicken and chocolate, and about not going out and doing more brain-eating vigilante work, and about the chances of reuniting with Eddie’s ex-fiancée, Anne Weying (Michelle Williams), and about Eddie’s lack of skill as a reporter. At one point, the two go their separate ways, and Venom finds its way to a costumed rave where it gives a speech about being kept hidden away (“Stop this cruel treatment of aliens”), which the cheering attendees receive as one about acceptance. There’s a universe in which that scene satirizes toothless social-justice affirmations so vague they could apply to queerness or to creatures who just want to be free to eat brains. But Venom: Let There Be Carnage can’t really decide what the joke is beyond the absurdity of the scenario and just lets the moment hang there, curiously flat. It seems aware that the sequence doesn’t matter — that, in fact, nothing in the movie matters aside from the mid-credits scene that brought down the house at the fan screening I attended. It was all anyone talked about as we exited the theater, as though everything that had come before had already faded from memory. We should all be so lucky.