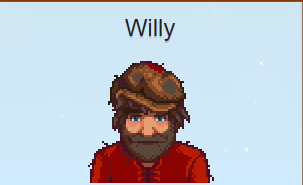 In Stardew Valley, Willy usually gets up about 6:10 a.m. and goes fishing at the beach for a few hours before opening his fish store from 9:00 a.m. to 5:00 p.m. After closing his shop, he’ll frequently go fishing on the beach until around 10:00 p.m. Instead of going to the beach after work during the winter, he’ll head to the saloon. He has an appointment at the clinic on the 9th of Spring.