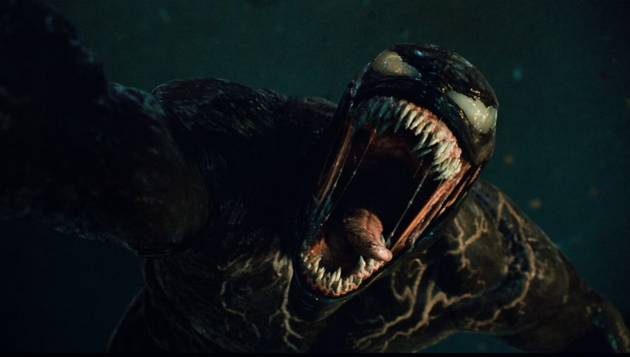 “ Venom: Let There Be Carnage ” is best when it’s not trying to be a comic book movie.

That fact may not bode especially well for future spinoffs and integrations within the so-called “Spider-Verse,” but one senses that director Andy Serkis, screenwriter Kelly Marcel and star/producer Tom Hardy are aware of this weakness. And they made the smart choice to lean into the oddball relationship between Eddie Brock and his alien symbiote Venom.

There is nothing remotely necessary about this sequel, which is itself a fruitless line of judgment to get into when it comes to any movie let alone franchise building blocks. But that also seems to free “Venom 2” to get weirder and more irreverent than the first movie, when it seemed like no one could decide how seriously they were taking themselves. Turns out “not very” was the right answer.

Here we meet up with Eddie and Venom in what Serkis has called their “odd couple” phase. Eddie is in full bachelor mode as his ex, Anne (Michelle Williams), has recently gotten engaged to Dan (Reid Scott, who is a perfectly game and unflappable punching bag).

Eddie and his symbiote live in his tiny San Francisco apartment in near squalor and bicker all day long and it is really quite amusing. Venom loves to give advice — relationship and otherwise. It’s like an ongoing inner monologue, just with an oily alien whose ideal meal is human brains (don’t worry, Eddie has instituted a chicken and chocolate only rule). In one scene set to “Let’s Call the Whole Thing Off,” Venom decides the only way to cheer Eddie up is to make bacon for breakfast.

Unfortunately because it is still a superhero adjacent movie, we can’t just watch Eddie go about his days sweaty and bothered with his chatty symbiote never giving him a moment of peace. There must be a villain and a threat and some ridiculous motivation as to why Eddie and Venom have to get involved at all.

This is where Woody Harrelson comes in, as the lovesick serial killer Cletus Kasady who wants Eddie (who is apparently still working as an investigative journalist) to write his life story. Harrelson seems to be having fun as the psychopath murderer who only wants to get back to his true love, played by an offensively underutilized Naomie Harris.

Later, Cletus will get his own symbiote and become the titular Carnage. And even as the movie devolves into garish and nonsensical action (in Grace Cathedral of all places), it still retains enough awareness to have Carnage sincerely shout the title of the movie at a climatic moment.

It’s hard to overstate just how much the relative success of this film comes down to Hardy and his go for broke performances as Eddie and Venom. Perhaps the gimmick is a little one note, but it’s still silly fun hearing Venom use the same intonation whether he’s saying, “Let me eat him” or “No! I get brain freeze” when Eddie says he’s going to get ice cream.

And Serkis was an inspired choice to take over the efforts from Ruben Fleischer. Who better than Golum to find the good stuff in a split personality mo-cap/CG performance? It’s just too bad it also requires the superhero hook to justify its weird existence.

“Venom: Let There Be Carnage,” a Sony Pictures release in theaters Friday, is rated PG-13 by the Motion Picture Association of America for “intense sequences of violence and disturbing material.” Running time: 97 minutes. Two and a half stars out of four.