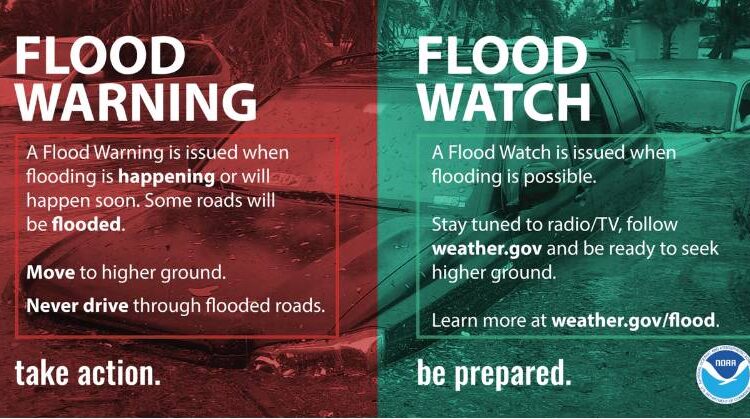 As a severe nor’easter continues to pour heavy rain throughout New Jersey, many flash flood warnings were issued overnight and will continue into the Tuesday morning rush. Storm totals of over 6 inches are now forecast.

Despite the fact that the threat of severe thunderstorms has passed, the National Weather Service has issued a flash flood warning for the whole state as of 6 a.m. Throughout the day, winds are likely to pick up.

UPDATE: A flash flood warning is in force for much of northern and central New Jersey until 5 p.m. Tuesday, and until 6 p.m. Tuesday in Bergen, Essex, Hudson, Passaic, and Union counties. The National Weather Service discontinued the flash flood watch in Atlantic, Camden, Cape May, Cumberland, Gloucester, and Salem counties in South Jersey about 9:30 a.m.

According to unofficial estimates, towns across New Jersey have received more than 3 inches of rain in the first 12 hours of the storm, with Wayne in Passaic County leading the way with 3.72 inches, followed by Waldwick in Bergen County with 3.49 inches, Kendall Park in Middlesex County with 3.43 inches, and Howell in Monmouth County with 3.36 inches.

The weather service warned in its morning report that up to 3 inches of rain might fall after 8 a.m. Tuesday. Another 1 to 2 inches of rain is expected throughout most of the state.

On Monday, Gov. Phil Murphy proclaimed a state of emergency in anticipation of the storm.

The following are the current flash flood warnings, which are more serious than a watch and signify impending danger: