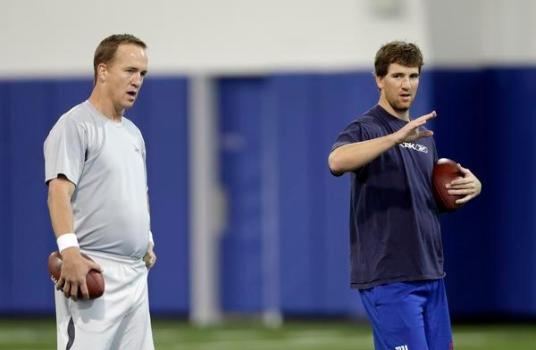 ‘They had a special sauce,’ Peyton and Eli Manning explain on ‘Manningcast,’ the secrets of breaking in footballs

Peyton and Eli Manning returned to “Monday Night Football” after a three-week hiatus with jokes, insults, and insights that included an f-bomb from Marshawn Lynch, candor from Tom Brady, and special sauce served up during conversation during the second half of the game between the New Orleans Saints and the Seattle Seahawks.

“Warren Moon threw the finest spiral of anyone in football history, and he threw a gleaming ball out of the box,” Peyton remarked. “It’s not right. It could only be done by him.”

This isn’t the first time the Manning brothers have spoken with their tongues in their cheeks. However, when the conversation shifted to how they broke in regulation NFL footballs throughout their careers, there was not a single grin to be seen during the following discussion, which has been simplified for clarity.

“You can’t toss a fresh ball,” Eli says. You have to massage ’em. You’ll have to sand them. You’ve got a sander. That’s why, Peyton, the guys in the equipment room, that’s their job. I saw you talked to your equipment people a lot, just to make sure everything was flawless, right?”

“Absolutely,” Peyton says. Those gentlemen who were in charge of the equipment were fantastic. They were going to put them in the sauna. Rough them up. …”They had a particular sauce…”

“With what?” Eli inquires.

“They had a particular sauce,” Peyton says. I’m not allowed to say what’s in the sauce.”

Is it possible that the “sauce” was a deadpan Manning brother joke?

“Tom Brady and I really launched a campaign that the home team should tear down their own footballs,” Peyton stated without a smile.

It was too late to ask Brady, who had come to the game as a guest of the Manning brothers in the first half.

On the fourth episode of the “Manningcast,” the alternative MNF broadcast, is there sly timing?

Perhaps, and it was one of the most fascinating moments, which also contained the following:

Peyton arrived for the broadcast wearing the same No. 10 Ole Miss football jersey that Eli wore during his time with the Rebels.

“Peyton, you look great in that jersey, pal,” Eli said. “That’s a great Ole Miss uniform. That appeals to me. Thank you for putting it on.”

“What the (expletive)?” could have questioned Marshawn Lynch.

“Yeah, I lost a wager, folks,” Peyton explained. The bet was that Ole Miss will beat Tennessee (in football) two weeks ago. The loser was forced to wear the other player’s shirt.”

Peyton was allegedly gifted a medium-sized jersey by Eli.

“I know you wanted one of my own jerseys,” Eli said, “but I didn’t want your enormous head straining out the neck too much.” “I’d never be able to wear it again again.”

As a result, the tally-keeping could commence.

“There are a lot of wagers on when the first big head, big forehead joke will appear,” Peyton says. “Of course, there are 12 minutes left in the first quarter.”

Although the Ole Miss shirt was a great touch, it may be time to stop the forehead jokes.

With the simplicity of tossing a football back and forth, Eli and Peyton know how to entertain fans by needling and mocking each other. They also demonstrated that they knew when to make room for their visitors.

When the Tampa Bay Buccaneers quarterback joined the broadcast, there was some lighthearted joking between the Mannings and Brady. The brothers, on the other hand, did an excellent job of allowing Brady to speak freely – and with extraordinary honesty.

He corroborated Rob Gronkowski’s admission that the tight end watches game video with Brady. He made fun of defensive players for their lack of intelligence. He also said that Byron Kennedy, the fan who presented Brady with the football he used to throw his 600th career touchdown pass on Sunday, acted too hastily.

“When Byron took the ball away, he recognized he’d lost all of his leverage,” Brady said. “If he had held it, he would have had the most leverage.”

“If he would have held it, he would have been sitting in the Tom Brady suite for the rest of the season,” Peyton joked with the proper timing.

Eli made no apologies for the forehead jokes, but he did avoid mentioning Peyton’s “fivehead.” Coming out of a commercial break in the first quarter, it was Peyton who apologized.

“I want to express my gratitude to Marshawn Lynch,” Peyton remarked. “I’m not crazy about the lingo.” Please accept my apologies for some of the profanity used. This isn’t what we’re going for with this program.”

F-bombs and other expletives don’t appear to be part of ESPN’s plan for the “Manningcast.” Neither was the double-bird Eli flipped earlier in the show.

As the apologies proceeded, Peyton stated, “I had to remind Eli that this program is live.” “But Eli has learnt his lesson,” says the narrator.

What is the takeaway?

Eli said, ‘Keep your hands down.’

The “Manningcast” gets a thumbs up and a handshake.